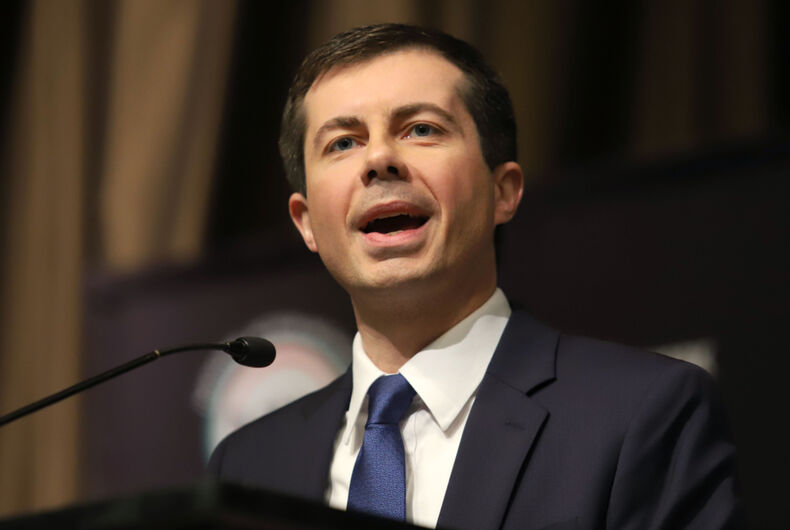 During Buttigieg’s speech, hecklers shouted “Marriage is between a man and a woman,” “Repent” and “What about the babies?” The anti-abortion protestor was then crowded out of the room by several men who blocked her cell phone camera and line of sight as she repeatedly said, “Do not touch me.”

In addition to the hecklers, there were several protestors outside of Dallas Anatole Hotel dressed as Jesus holding a large wooden cross and holding signs with images of aborted fetuses. The protestors were reportedly organized by Randall Terry, leader of the extreme anti-choice group Operation Rescue.

Terry has said of Butigieg, “There are literally children who are going to be seduced into the homosexual lifestyle because this man is heralded as a hero. He’s a champion, and that makes him more sinister than the average person… he’s an evil-doer. He’s the beautiful face of evil.”

Here are images and video from the Dallas protest against Buttigieg:

There are some protesters here at Mayor Pete Buttigieg’s speech at the Dallas County Democratic Party Dinner. They’re familiar faces if you watched the Mayor’s Iowa kickoff rally. pic.twitter.com/sQDVuWQQzR

Pete Buttigieg has been interrupted four times here in Dallas by protesters. One yelled “Marriage is between a man and a woman!” Another yelled “Repent!” After the 4th, Buttigieg continued, “The moment I packed my bags for Afghanistan, to defend that man’s freedom of speech…” pic.twitter.com/zIpDSCIrti

After being interrupted for the fourth time during his speech, Buttigieg responded, “The moment I packed my bags for Afghanistan, I did so to defend that man’s freedom of speech.” In response, the audience cheered and applauded.

In response to the hecklers, Texas-based presidential candidate Beto O’Rourke tweeted a supportive message opposing homophobia and welcoming Buttigieg back to Texas. O’Rourke was also speaking in Texas that same night, at an outdoor event in downtown Fort Worth, 30-minutes away from Buttigieg’s Dallas event, according to ABC News.

O’Rourke tweeted, “Texans don’t stand for this kind of homophobia and hatred. Mayor Pete, we are grateful you came to Texas and hope to see you and Chasten back again soon.”

Are there any Democrats left who are NOT running for president?