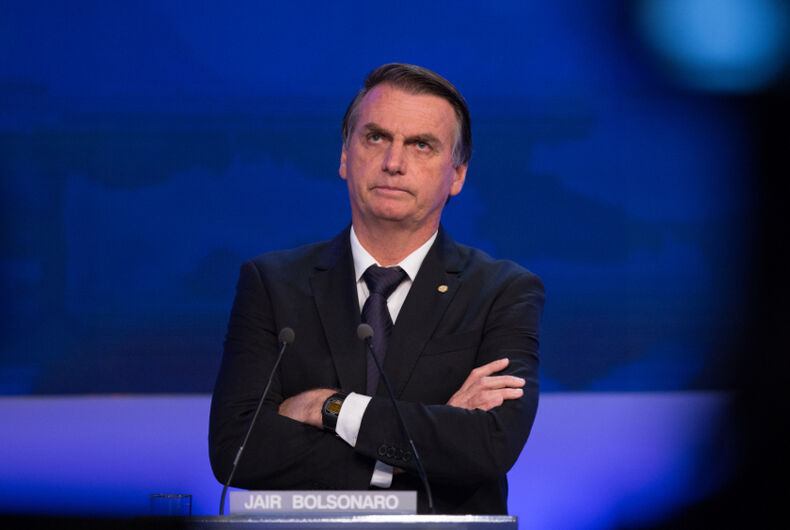 Amid growing protests by LGBTQ and environmental activists, Brazil’s antigay President Jair Bolsonaro has cancelled his upcoming U.S. visit to receive the “Person of the Year” award from the Brazilian-American Chamber of Commerce on May 14.

In a statement, Bolsonaro’s spokesperson, Otávio do Rêgo Barros, wrote, “In the face of the resistance and deliberate attacks of the Mayor of New York and the pressure of interest groups on the institutions that organize, sponsor and host the event annually, the event was characterized by activist ideology.”

The gala was initially planned for Manhattan’s Museum of Natural History, but the venue pulled out after numerous people pointed out Bolsonaro’s plans to destroy Brazil’s rainforests. Cipriani Hall, an Italian neo-renaissance style historical venue in Wall Street, also turned down the event.

Amid the cancellations, New York City Mayor Bill de Blasio tweeted, “Jair Bolsonaro is a dangerous man. His overt racism, homophobia and destructive decisions will have a devastating impact on the future of our planet. On behalf of our city, thank you to [American Museum of Natural History] for canceling this event.”

Jair Bolsonaro is a dangerous man. His overt racism, homophobia and destructive decisions will have a devastating impact on the future of our planet. On behalf of our city, thank you to @AMNH for canceling this event. https://t.co/06NAZovyoe

Ever since the Marriott Marquis hotel was announced as the event’s new venue on April 30, activists have protested its front entrance. Delta Airlines, Bain & Company and the Financial Times pulled their sponsorships from the event, and over 65,000 people signed a petition asking Marriott and Host Hotels and Resorts to cancel the event.

Citing Bolsonaro’s claim that he “would be incapable of loving a homosexual son” and would rather his son be dead than gay, the petition read:

“By hosting this event, Marriott is giving President Bolsonaro a platform that rewards his outrageous behavior. We do not believe that Marriott and Host Hotels can claim to be ‘responsible corporate citizens’ if they force Marriott Marquis employees to work for an event that honors a well-documented bigot.”

During Bolsonaro’s March 2019 visit to the White House, he said that he and President Trump were united in their opposition to so-called “gender ideology,” the South American buzzword for LGBTQ rights and feminism.