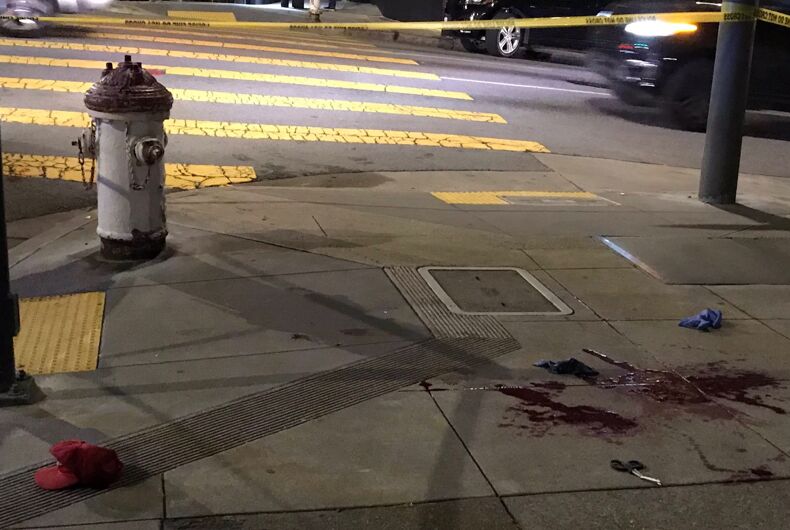 A photo of an alleged sword-wielding assailant's MAGA hat next to a pool of his victim's blood.Photo: Twitter/Scott Sweeney

A man wearing a MAGA hat allegedly attacked a man outside a San Francisco rollerskating rink after muttering anti-gay slurs at people entering the arena.

Scott Sweeney was walking into the Church of 8 Wheels roller rink with his girlfriend when they passed the deranged Trump supporter standing outside the queer-friendly venue wearing the hat.

“My girlfriend and I had to get cash for the roller skating event from a convenience store across the street. We went there, got cash and a beer, and walked out. Leaning against the wall 15ft away from the convenience store was a man with a MAGA hat, we walked by him,” he posted on Twitter.

“He glared at us, we noticed the hat and the glare and flipped him off. He started yelling homophobic slurs at us. We walked across the street back to the roller skating event and drank the beer next to the entrance. He was staring at us the whole time.”

“We finished the beer, walked up to the entrance and waited in line to pay for tickets just outside the doors to get in. We then saw him walk up the stairs (hat now turned backwards), and poke his head in the door then walk back,” he continued. “He walked by us and under his breath said ‘not my scene’ to me and my girlfriend before turning his back to his. As he turned his back to us, we noticed a large item tucked in the back of his jacket with what looked like a sword handle poking out the top.”

“In our minds, it was so bizarre that we thought it was just an anime enthusiast with a fake sword. He then walked back down the stairs and stood on the sidewalk glaring at us. At that point we were weirded out and shuffled quickly into the lobby.”

Police say the unidentified man got into a verbal spat with a different would-be skater entering the rink and the suspect’s hat came off his head. When it did, the reported attacker whipped out his sword and cut the victim severely on the hand.

Reports differ on whether or not the victim knocked the assailant’s hat off or if it came off during the altercation.

“We walked in, had a roller skating time, we then came back out to the police tape and blood and the MAGA hat on the ground. We gave our report to the police. We were dumbfounded, he clearly had intentions to hurt us,” Sweeney said. “He had been biding his time across the street watching the event.”

David Miles, who started the rink at a former Catholic church, told the paper he ran outside to help when he heard about the attack.

“I came outside. The guy was cut, he was bleeding like you wouldn’t believe,” Miles said Saturday. “He was just gushing blood, so we got the first aid kit from inside and tried to stop the bleeding.”

Photos posted to social media after the attack show the hat on the ground near a large pool of blood.

“This is the last thing you think is going to happen,” Miles said. “I’m very, very, very concerned. I don’t really know what to think.”

The assailant is still on the loose with his sword. The victim was treated at a local hospital.

Tonight is the first time I have ever experienced how utterly crazy T-rump people really are!!! A guy wearing a MAGA hat…

This Republican pled guilty to paying two young boys for sex multiple times. Now he denies it all.