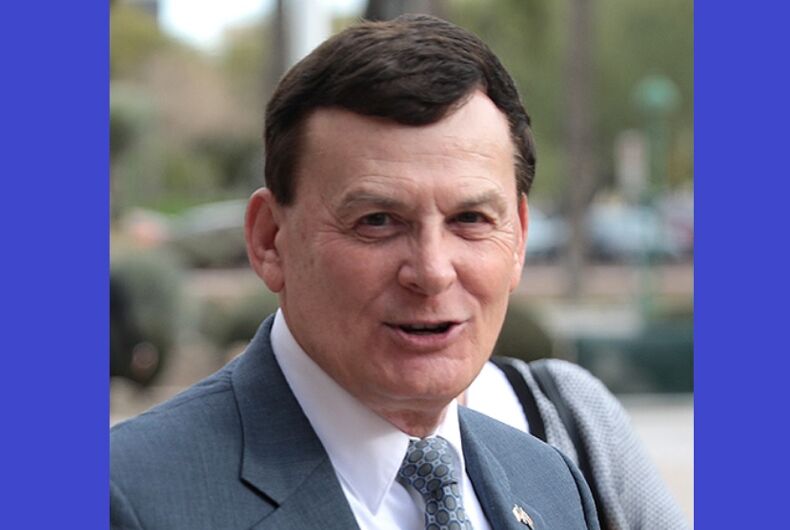 Arizona Representatives David Stringer, 71, was accused in 1983 of paying for sex with two underage boys under the age of 15; he was 35 or 36 according to a report released by the Arizona House Ethic Committee.

The other victim reportedly had a mental disability.

Stringer faced eight charges including child pornography charges. He pled guilty and was sentenced to five years of probation and told to do a program for sex offenders.

Related: Republican politician gets 15 years in prison for sex trafficking a teenage boy

Reports of his past surfaced this past January when the Phoenix New-Times found a record of his arrest for unspecified sex offenses in 1983. Stringer admitted that he had been arrested but called article a political attack.

For two months the Arizona House Ethics Committee investigated, and Stringer called the reports “fake news” and accused his Republican colleagues of a politically motivated attack.

“We watch Democrats like Jerold Nadler or Adam Schiff go on TV and tell everyone how President Trump is definitely guilty but then promise to conduct fair investigations and we shake our heads, or laugh, or cry at what has become of our system,” Stringer wrote in a Facebook post last Tuesday.

“Seeing that happen here in Arizona is no laughing matter.”

His lawyer said that he denies any wrong-doing. “He was never convicted,” she told the Arizona Republic.

Stringer refused to cooperate with the Arizona House ethics investigation and, last Wednesday, he resigned.

The Republican came under fire this past November when he said that black students “don’t blend in” after a lecture at Arizona State University.

“They were all European,” Stringer said, referring to Irish and Italian immigrants.

“So after their second or third generation, everybody looks the same. Everybody talks the same. That’s not the case with African-Americans and other racial groups because they don’t melt in. They don’t blend in. They always look different.”

He also said that immigrants who don’t speak English are a “burden on the taxpayers.”

Republican leadership pressured him to resign as chair of the House Sentencing and Recidivism Reform Committee.