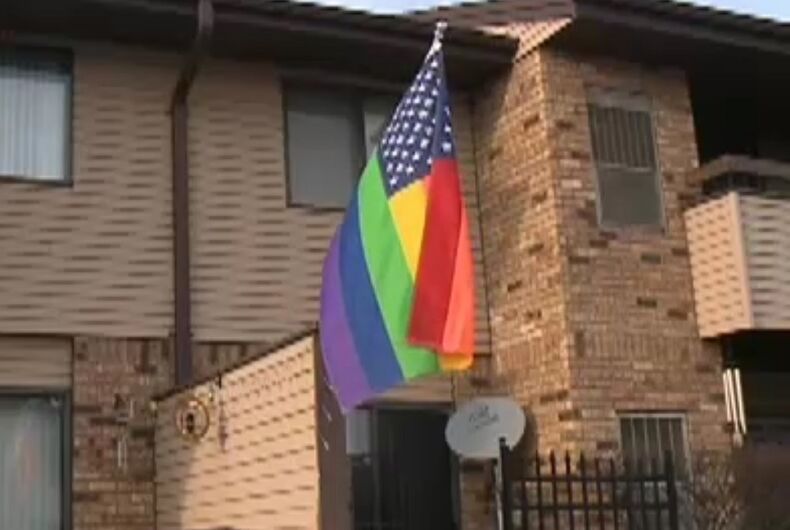 A gay couple in Wisconsin says they’re worried about getting evicted over their rainbow flag, even though other people in the neighborhood fly all kinds of flags without a problem.

Kevin Kollman and Merle Malterer have a rainbow American flag in front of their apartment in Oak Creek, Wisconsin.

Last week, Kollman and Malterer got a letter from the property owner that said they had five days to take down the flag because it was a breach of their lease.

The owner said that the issue is the appearance of the property, not the flag itself. He said that no one on the property is allowed to have a flag.

Related: These lesbians painted their house in rainbow colors to spite their anti-gay neighbor

But NBC2 News found other flags, mostly American flags, in the apartment complex.

“I’ve never been told to take it down,” said Ken Miller, another tenant who has a flag.

“I’ve been here for three years, and I’ve had these flags up for at least two years and I’ve never had any issues with the flags.”

“Personally, I feel like we’re being kind of singled out here because it’s what it is,” Kollman said.

Kollmann and Malterer said that they’re going to keep flying their flag and are considering legal action.

This Republican pled guilty to paying two young boys for sex multiple times. Now he denies it all.

Conservative writer’s disgusting tweets about a gay man got her fired. She says she’s the victim.