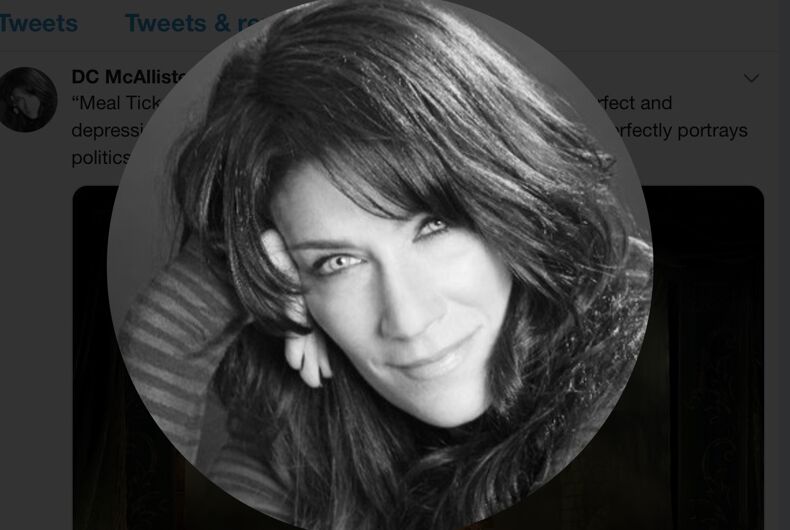 Conservative writer and political commentator Denise McAllister is out of a job after launching a series of horrifically homophobic tweets at gay journalist Yashar Ali. She was fired by The Federalist shortly after the exchange and dumped as a contributor to The Daily Wire.

Of course, she claims that she’s the victim.

McAllister, who made her career defending traditional gender roles and toxic masculinity, kicked it off with a tweet about how her husband acted like a caveman when football was on television. But when Ali responded (along with many others) about the toxic masculinity and sexism inherent in the tweet, McAllister launched her disgusting attack.

“Trying to talk to my husband while Carolina is playing,” she tweeted. “He looks at me and says, ‘Woman, you know better than this. The game is on.’ He’s right. I slipped.”

“Commercial comes on. I fetch him a beer. He grabs me. Deep kisses. Patience and timing, ladies. That’s the lesson.”

McAllister responded with “A gay man commenting on a heterosexual relationship is just. Sad. Pathetic really.”

But she wasn’t done there. In subsequent now-deleted tweets, she continued her bizarre rant continued – and it got ugly quick.

In other tweet, she added, “I think @yashar has a crush on me. Maybe I’m making him doubt his love of penis.” She included a kissey-face emoji at the end.

After her foul tirade, Federalist publisher Ben Domenech sent his own tweet.

In response to your many inquiries, we've spoken and Denise McAllister will not be writing for us at The Federalist any more.

“We have hundreds of freelancers,” he told The Washington Post. “She won’t be one of them going forward.”

McAllister deleted several of the tweets and issued a half-hearted apology to the Washington Post, saying, “I apologize to Yasher [sic] Ali for responding to a perceived attack on my family in the manner I did.”

But on Twitter, McAllister wasn’t as apologetic. Instead, she was defiant.

“I was fired when I criticized a gay man who mocked my heterosexual relationship,” she tweeted. “Yet no one defended me when I stood for masculinity and God’s design for sexuality despite outlets saying they represent Judeo-Christian values about sexuality, identity and purpose. What is truth?”

The Daily Wire‘s Ben Shapiro told the Post that he had asked McAllister to remove the publication from her Twitter bio, saying he found the tweets “gross” and “self-explanatorily beyond the boundaries of decency.”

During a now-deleted back-and-forth on the social media site, McAllister implied she had “quit” working for the Daily Wire, but  backed off the claim when Shapiro pointed out that she had never been employed there. She was a freelance contributor.

Realizing her career was crumbling before her eyes, McAllister tried to backpedal and make nice in her statement to the Post. While her apology to Ali was tepid at best, she made sure to also apologize unequivocally for “any embarrassment I caused Ben Shapiro and The Daily Wire as well as Ben Domenech and The Federalist.”

Her Twitter bio now simply says, “I stand for truth.”

I have defensed masculinity & have been ridiculed for it. Maligned for loving my husband as a man & celebrating my role as a woman. Yet I’m the devil in the eyes of many. I criticize a gay man who dares to mock my relationship. And I’m the devil. You do see how fucked up this is

In 30 states, LGBTQ people can still be fired solely due to their sexual orientation and/or gender identity.

LGBTQ youth have a suicide rate that is much as three times higher than their non-LGBTQ peers.

Why is the government withholding billions of dollars in PrEP profits from American citizens?