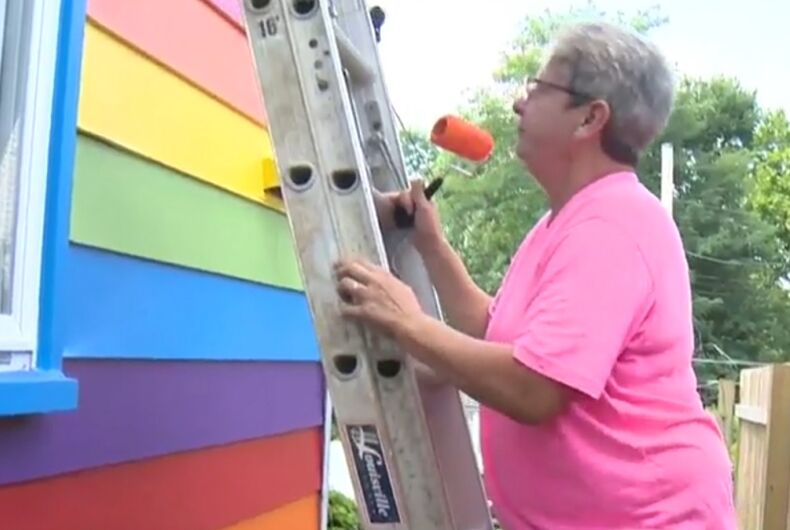 A lesbian couple in Pennsylvania is painting their house rainbow colors to get back at their homophobic neighbors.

Lisa Licata and Sherry Lau say their neighbors, Ron Makay and Iolanda Wieczorkowski, have been harassing them for years.

Makay has called them “homos” and “dykes” ever since he found out that they’re a married couple.

The hatred turned violent when Makay allegedly shot Lisa and Sherry’s dog with an air rifle. Police have charged him with animal cruelty.

So to keep their neighbors at bay, Lisa and Sherry put up a fence. And they painted it rainbow colors, possibly to better ward off hatred.

According to Lisa and Sherry, this upset Makay even more and he kept on harassing them. So they raised the stakes and painted the side of their house that faces him rainbow colors.

“When he protested against the fence being rainbow, that’s when we decided, let’s do the house,” Lisa said.

They plan to paint their entire house rainbow colors.

“This is the 21st century,” Sherry said. “We live here. We’re not moving. My family accepts us. Our friends accept us. If you don’t like it, just live your life, leave us alone and everything’s cool.”

Makay refused to comment on the matter. His attorney says he did not shoot the dog.

Video: Watch Aretha Franklin’s funeral live as the world says goodbye to the Queen of Soul