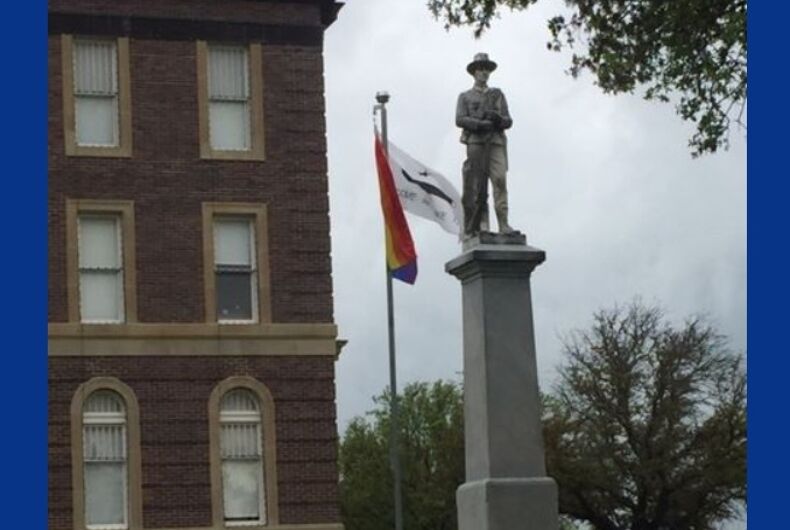 A Texas town has become embroiled in a Confederate flag controversy that led to people “vandalizing” a flag poll by putting up a rainbow flag.

For the past six years, the First National flag of the Confederate States of America flew outside the Mills County Courthouse in Goldthwaite, Texas.

But shortly after County Judge Ed Smith was sworn in in January, the flag came down. On March 2 – Texas Independence Day – he had the Confederate flag taken down and put up the “Come and Take It” flag, replacing a symbol honoring treason in defense of slavery with a symbol honoring Texas’s unique history.

“It was to celebrate Texas Independence Day,” Smith told the Fort Worth Star-Telegram.

Related: Lesbian told to remove ‘offensive’ pride flag because it’s the same as the Confederate flag

Some people didn’t like it and started to “vandalize” – Smith’s word – the flagpole outside the courthouse by putting up other flags.

One of those flags was the rainbow flag, which the Texas Sons of Confederate Veterans used to rally people against Smith. The group called Smith a “carpetbagger” because he’s from Fort Worth.

Posted by Texas Sons Of Confederate Veterans on Monday, April 8, 2019

In the comments on the Facebook post, people understood the message that was being sent by putting up the rainbow flag.

“Let’s someone in this area get their ass out there and haul down that fag flag,” Hubert Cash wrote in the comments.

“That slap on Jesus they should take it down,” wrote Janie Guice.

This past Tuesday, the flag was brought up for discussion at a meeting of the Mills County Commissioners Court.

Smith said that there was never a formal decision to fly the Confederate flag, so he had every right to take it down.

But the county commissioners voted 3-1 to fly the Confederate flag year-round.

A victory for Texas history at Mills County Courthouse in Goldthwaite this afternoon!The First National flag is up and flying again as it has for the last 6 years.

Posted by Texas Sons Of Confederate Veterans on Monday, April 15, 2019

While he lost that vote, Smith said that he wouldn’t stop trying to get the town to stop honoring treason in defense of slavery.

“Nothing is forever. There can be other votes and other elections.”

The flag in question is the First National flag of the Confederacy, which is different from the more common Confederate battle flag.