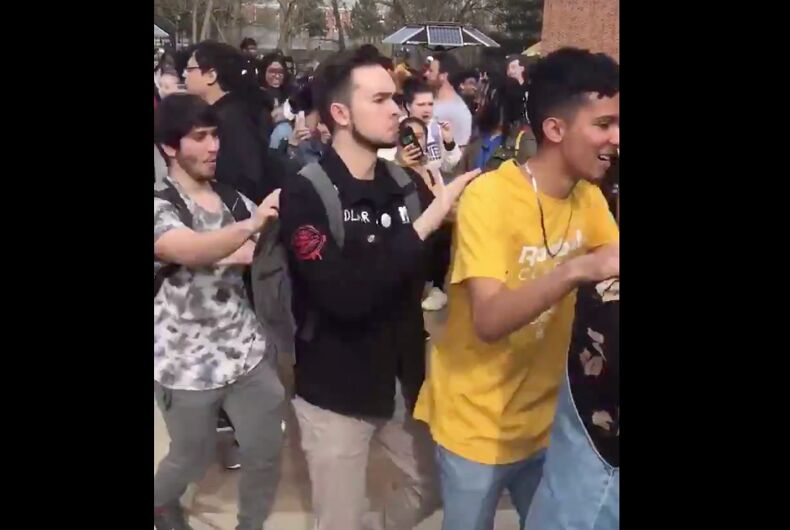 Students at Rowan University in Glassboro, New Jersey, weren’t happy with the religious zealots who showed up on campus to spread anti-LGBTQ hate – and they made it known with a unique protest.

They formed a giant conga line to drown out the speakers and had a dance party.

“Rowan is obligated as a public institution to allow freedom of expression, but we do not endorse or condone hate speech in any form,” university president Ali Houshmand said in a statement on social media.

“Rowan University is committed to providing a safe and inclusive environment for all members of the community and rejects the abhorrent sentiments expressed by the protesters. Today, many of us had the opportunity to stand against hate. I am proud of who we are.”

“We’ve been standing in the face of hate today, and many in our community have been standing against hate their entire lives,” Rbrey Duane Singleton, the Student Government Association president, said on their own statement.

“Let’s be bigger and turn our backs on hate. If we don’t give prejudice and bigotry our attention or power, it WILL leave. Let’s continue to spread love, inclusivity and pride everywhere we go, on and off campus.”

The students jeered the bigots with chants like “asshole!” and brought their own signs to show support for the LGBTQ community.

Two students, however, were arrested for throwing soda in the protesters’ faces.

It make me proud to be apart of a community like @RowanUniversity that stands behind unity and inclusion rather then viewing the personal lives and choices of others as "wrong". We are #Proud to be whoever we are, do what we choose, and to hold what we identify with. #RowanProud pic.twitter.com/2mk3yfxBF0

The last time a trans woman’s fiancé saw her they went to a movie. Hours later she was dead.