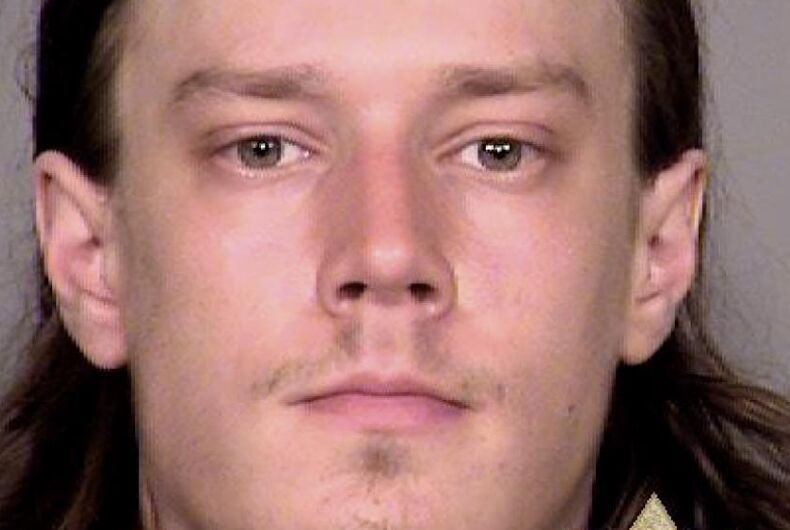 A Trump-supporter who allegedly muttered anti-gay slurs before slashing a man with a sword outside of a San Francisco roller skating rink has been arrested.

Police apprehended 30-year-old Leor Bergland and charged him with attempted murder, mayhem and assault with a deadly weapon after he allegedly slashed a man who knocked off his red “Make America Great Again” (MAGA) ball cap outside of the rink. The San Francisco Chronicle reports that Bergland allegedly “partially severed” the hand of 27-year-old victim Gabriel Gaucin.

Police retrieved the red MAGA cap and a beer bottle with Bergland’s fingerprint on it and eventually matched his fingerprint to the hilt of the sword used in the attack.

“Two days later [after the March 29 2019 attack], a security guard found a sword wrapped in a red plaid vest protruding from some garbage cans at 1175 Pierce St. and called 911, prosecutors said,” accordin to the Chronicle.

Bergland was reportedly “defiant” during his recent court appearance for the attack, telling prosecutors, “You just basically implied that I did it,” while trying to defend himself against the advice of his attorney. “Why are you telling me to be quiet?” he asked his attorney. “I can defend myself.”

Bergland didn’t enter a plea. His bail has been set at $250,000. There have been no reports on the well-being of Gaucin.

The red MAGA cap has become the instantly recognizable apparel for Trump supporters. During the 2016 election campaign, Trump’s supporters couldn’t agree on when America was once great: Some named years before women could vote or a time when slavery was still legal.

U.S. hate crimes have been on the rise since Trump’s election. Trump’s rhetoric has targeted Muslims, immigrants (particularly Mexican ones) and journalists.

It’s believed that Gabriel Gaucin is a man of Latinx origin as his surname is common in Mexico.