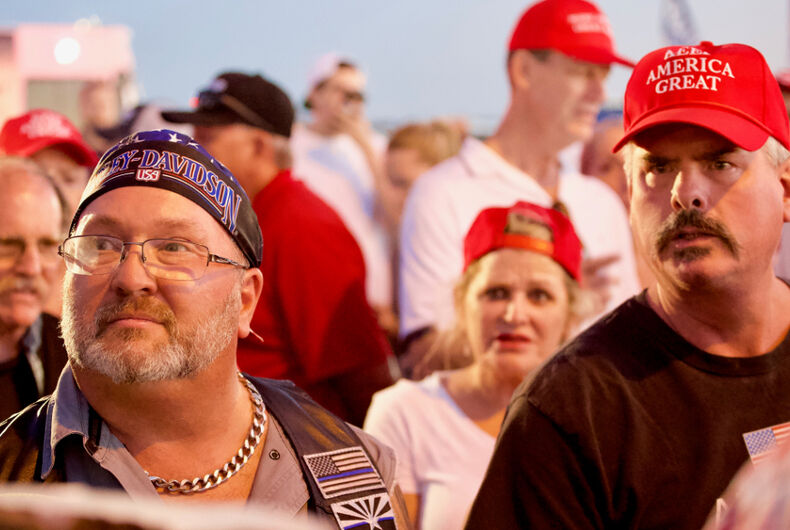 A recent study by scholars from the University of North Texas has shown that “counties that had hosted a 2016 Trump campaign rally saw a 226 percent increase in reported hate crimes over comparable counties that did not host such a rally.”

We already knew that U.S. hate crimes have been on the rise since Trump’s election. Even though the president’s spokespeople falsely claim that he doesn’t support political violence, he continues making barely veiled threats to his political opponents.

But this is the first study to quantify how Trump’s very presence might increase animus against marginalized people (though researchers stop short of claiming causation).

Here, the researchers explain their methodology:

Using the Anti-Defamation League’s Hate, Extremism, Anti-Semitism, Terrorism map data (HEAT map), we examined whether there was a correlation between the counties that hosted one of Trump’s 275 presidential campaign rallies in 2016 and increased incidents of hate crimes in subsequent months.

To test this, we aggregated hate-crime incident data and Trump rally data to the county level and then used statistical tools to estimate a rally’s impact. We included controls for factors such as the county’s crime rates, its number of active hate groups, its minority populations, its percentage with college educations, its location in the country and the month when the rallies occurred.

Their analysis included all reports of vandalism, intimidation and assault following Trump’s rallies. The researchers don’t directly blame Trump for the rise in hate crimes, but they do acknowledge “The Trump Effect” in public schools, in which young people mimic Trump’s abusive words and actions against their peers.

In the past, Trump has praised citizens for attacking journalists, praised police for “roughing up” arrested suspects and has called Mexicans drug dealers and rapists. His policies have mostly targeted the poor, undocumented immigrants, trans people and people of color.

When asked whether he thought he should tone down his language, Trump responded, “I think my language is very nice.”