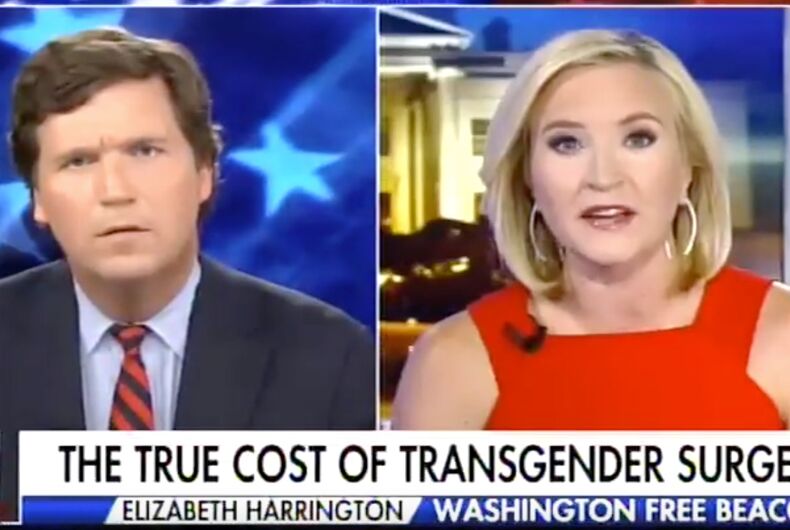 The Republican National Committee has picked up a new national spokesperson, Elizabeth Harrington, and to no one’s surprise, she’s rabidly transphobic.

The GOP, and Republican president, Donald Trump, have made no bones about their contempt for transgender people, including banning trans soldiers and working to remove transgender people from other federal protections — but Harrington sinks to a lower level than what one may be used to even from the Grand Old Party, serving as a master manipulator of facts.

Prior to taking the spokesperson role, Harrington has served as a senior writer for the Washington Free Beacon, a far-right online newspaper. She has a record of attacking transgender people in thinly-veiled hit pieces masquerading as news.

In justifying the transgender military ban, Harrington wrote, citing a study by the RAND Corporation, “RAND recommended that the military allow transgender individuals to serve openly and estimated that transgender surgeries would only cost between $2.4 million to $8.4 million per year.”

“Given that transgender surgeries cost an average of $132,000, according to CNN, the RAND study assumes only 18 to 63 transgender troops would seek taxpayer-funded surgeries,” she added.

It should go without saying that transgender surgical options, even on the high end, do not reach an average of $132,000.

She also argued that surgeries such as an orchidectomy or vaginoplasty would lead to a transfeminine service member being undeployable for 135 days, a gross overstatement of the typical six weeks of post-surgical aftercare required for a vaginoplasty as well as the days spent on aftercare for an orchidectomy.

She has also claimed that the Pentagon would pay out $1.3 billion dollars for genital reassignment and related surgeries, again by falsely claiming that these surgeries would cost, on average, $132,000.

Media Matters took her to task for her misleading accounting, noting that the RAND Corporation’s study estimated a $2.4 to $8.4 million dollar annual cost for supporting transgender troops, far below the costs Harrington cited.

Harrington has not limited her opinions to the Washington Free Beacon, either, appearing on radio and television to speak out against transgender people, including comments that Harrington raised on Tucker Carlson’s Fox News program.

“There’s a tremendous amount of cost, but it’s also the readiness issue. And I don’t think there are many qualified people that can serve. And really, disqualifying transgender because of these very practical reasons shouldn’t get in the way of us being a strong military force.

Harrington’s also not limited her views to the military, as one can tell from these comments about a transgender student on The Morning Blaze in July of 2017.

“It literally even says, she [referring to a student who does not wish to share facilities with a transgender girl] can be removed and put into their own bathroom, single-occupancy bathroom, as long as it doesn’t stigmatize the gender non-conforming student, whatever that means. Cause it’s, like, still all about this one kid who wants all the attention.

“Part of this is if a kid feels uncomfortable, that kid has to be segregated from the rest of the group, not the one kid who’s saying, ‘Hey, I’m a girl now, let me come into the girls’ locker room and bathroom.’

“It’s crazy, it’s literally insane how trendy this has become and then all of these rules in place for something that really was very, very uncommon and now everyone has to change.”

As unsurprising as Harrington being picked up by the RNC for a spokesperson position, it should nevertheless make it clear her dodgy knowledge and obvious dislike of transgender people will remain a talking point used by the right as we head into election season.

If Trump was really religious, he’d want to protect churches from deranged killers