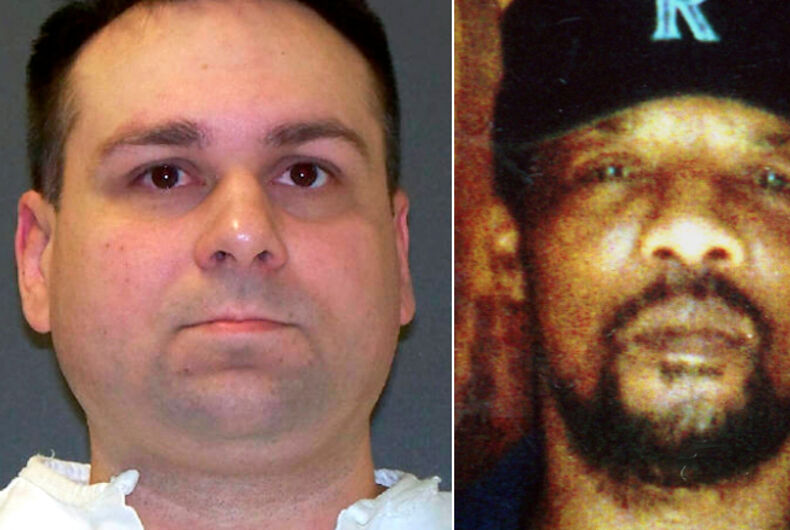 Today one of the three men who murdered James Byrd will step into an empty chamber in a prison in East Texas. He will receive an injection of pentobarbital. And then 21 years after he dragged Byrd behind a pickup truck until his body was ripped apart, he will die.

Barring a last-minute stay of execution, John William King will be put to death today in the Huntsville Unit penitentiary in Huntsville, Texas. He is the second of Byrd’s killers to be executed following the grisly 1998 hate crime, which took place just months before Matthew Shepard was left to die by two men in Laramie, Wyoming.

Often referred to as a “modern-day lynching,” Byrd was murdered by three white supremacists on June 7, 1998 after they picked him up on the side of the road. King, along with accomplices Lawrence Russell Brewer and Shawn Allen Berry, spray painted Byrd’s face and chained his ankles. Following the three-mile drive that ended his life, they dumped Byrd’s severed body in front of a historically black church.

While Brewer was executed eight years ago, Berry received a sentence of life in prison after he chose to cooperate with police. He will be up for parole in 2038.

Despite the fact that police discovered King’s hat and buttons from his shirt at the abduction site, the 44-year-old has maintained his innocence. He has repeatedly delayed execution by filing a series of unsuccessful appeals, claiming he was given unsatisfactory legal counsel during the trial. The U.S. Supreme Court declined to hear his case in 2018.

Although a motive for the crime was never established, prosecutors claimed King was a member of the Confederate Knights of America, a white supremacist group. He has never contested his ties to white nationalism. Tattoos on his body reportedly include a swastika, the phrase “Aryan Pride,” and a burning cross. To hammer the point home even further, he also has a tattoo of a black man being hung from a tree.

Byrd was survived by three children. His daughter, Tiffany Taylor Holmes, and sister, Louvon Byrd Harris, will be present as his killer is put to death.

The outrage over the murders of Byrd and Shepard two decades ago helped draw national attention to the epidemic of hate crimes in the United States. Shepard, who was just 21 at the time of his death, was tied to a fence and savagely beaten by Aaron McKinney and Russell Henderson. They avoided the death penalty but each received two consecutive life terms. McKinney is not eligible for parole.

But on the statewide level, legislators are still catching up with the reality of hate crimes against vulnerable minorities across the country. Just 19 states (and Washington, D.C.) have fully LGBTQ-inclusive hate crimes laws on the books, while four states have no hate crime laws at all. These states include Arkansas, Indiana, South Carolina, and Shepard’s home state of Wyoming.

Hate crimes in the U.S. increased 17 percent during the first year of Donald Trump’s presidency. According to the Federal Bureau of Investigations, bias attacks motivated by the victim’s race shot up 15 percent. Anti-LGBTQ hate crimes, meanwhile, rose by three percent.