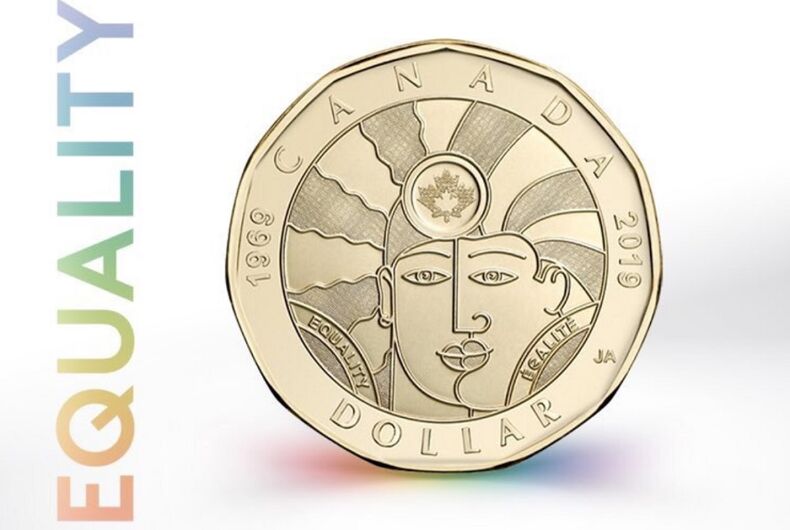 In a ceremony, the Royal Canadian Mint showed a large version of the loonie – a $1 Canadian coin – which had an LGBTQ2S design on the back. Around three million coins will be made in its limited run.

The design, created by Vancouver artist Joe Average, shows two faces with two years: 1969 and 2019. 1969 was the year that Canada’s parliament “initiated the decriminalization of homosexuality.”

A maple leaf is in the design with the words “Equality” and “Egalité.”

“For too long, people didn’t listen. They didn’t extend compassion or empathy or understanding,” said Finance Minister Bill Morneau as the design was unveiled.

“Because of that, years ago, people made it a crime to love in Canada. We made being yourself a punishable offense.”

The design has come under criticism by LGBTQ advocates who say that it implies that equality has been achieved in Canada, citing HIV disclosure laws, the gay blood ban, and policing of queer people of color and transgender people.

They also argue that there was no decriminalization of homosexuality in 1969, only the creation of an exception to the country’s anti-sodomy’s laws, which were still used to prosecute people for having gay sex, and many of the laws are still on the books.

The mint “could have consulted people who have knowledge of this history but they didn’t,” said York University history professor Tom Hooper.

Morneau said that the design is not meant to imply that the fight for equality is over.

“They recognize, as we should all recognize, that we are not at the end of this path,” he said. “We have much more to do.”