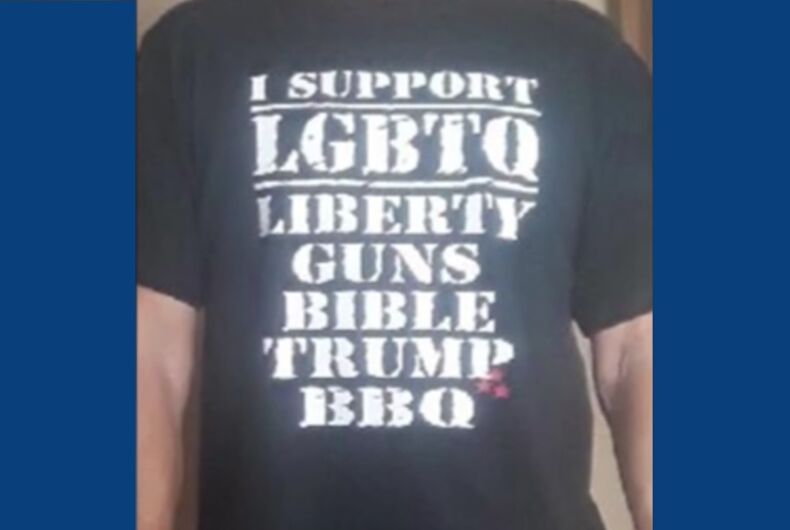 A Kentucky food truck owner has been criticized for selling an anti-LGBTQ T-shirt.

Jamie Smith, the owner of Belle’s Smokin’ BBQ in Williamstown, posted a message on Facebook to promote “swag,” which included a T-shirt that read “I support LGBTQ — liberty, guns, Bible, Trump, BBQ.”

“I found the acronym on Facebook and I just added the Q,” Smith told Fox19Now, referring to the T-shirts’ initialism.

“I posted the shirt today for new swag and it just went out of hand and it got blowed up,” he added.

“Wearing that shirt is fucking offensive,” said one commenter on the since-deleted post.

“These are the types of messages LGBTQ kids see that make them feel isolated and that they won’t be accepted in their community,” he said in a statement.

“If this has offended anyone that wasn’t our intention, it was just a good play on words,” Smith said.

He also posted a statement to Facebook apologizing “if we have offended any groups, organizations or individuals with our shirts.”

But the statement also goes on to call criticism “harassing messages.”

“We know each person has their own thoughts and beliefs but we are hurt that the people who are saying, ‘stop the hate’ are the ones coming at us with harassing messages and threatening phone calls.”