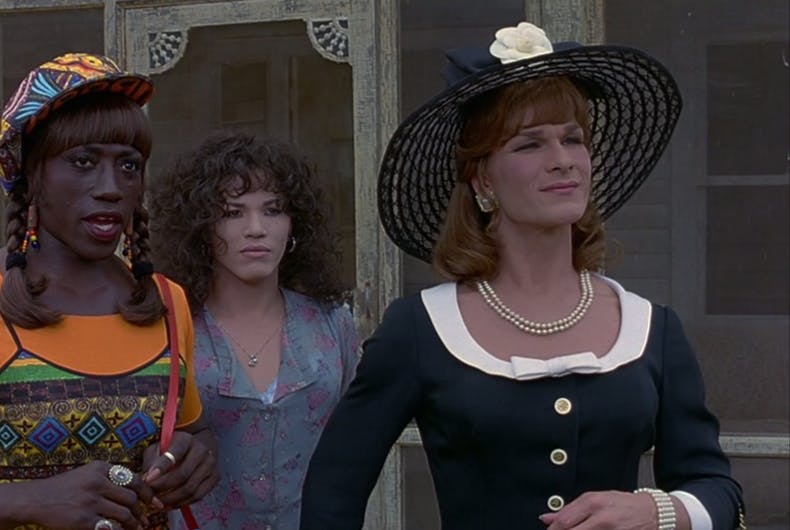 To Wong Foo, the 90’s comedy about three drag queens traveling across America and punching abusive men, is about to be released on blu-ray with new footage.

Shout! Factory announced that the film will have new content, including a look back at the making of the movie and interviews with screenplay writer Douglas Carter Beane and actor John Leguizamo, who played Chi Chi in the film.

It’ll be interesting to see how the film has aged. LGBTQ identities are understood differently than they were at the time.

The movie was originally released in 1995, the year after Don’t Ask Don’t Tell (DADT) became law and a year before the Defense of Marriage Act (DOMA) was signed. Brandon Teena was murdered a few years before and Boys Don’t Cry would come out several years after. Ellen was starring in her hit sitcom, but she hadn’t come out yet.

Related: A ‘To Wong Foo’ musical is about to hit the stage

It was a time of increasing visibility for LGBTQ people in mainstream media, but the increase was from complete invisibility to near invisibility.

That’s a line that the movie, which pulled in nearly $50 million in box office receipts, tries to walk. The three stars of the movie were all straight men in real life, and Wesley Snipes (Noxeema Jackson) and Patrick Swayze (Vida Boheme) in particular had made careers out of their heterosexuality and masculinity.

The three queens don’t identify as trans women but they stay in drag all day, every day. They do say in a famous scene in the beginning of the movie that they’re gay men, but they never present as men and Vida and Noxeema appear much more interested in making racist jokes about latinx people than they are in dating men.

But the movie has a place in queer cultural history. The three queens are the protagonists of a film that’s fundamentally about understanding people who are different, they help the racist, sexist, and homophobic town of Snydersville confront its toxic masculinity, and the looks – like RuPaul’s legendary Confederate flag dress – are amazing.

The blu-ray will be released on May 28.