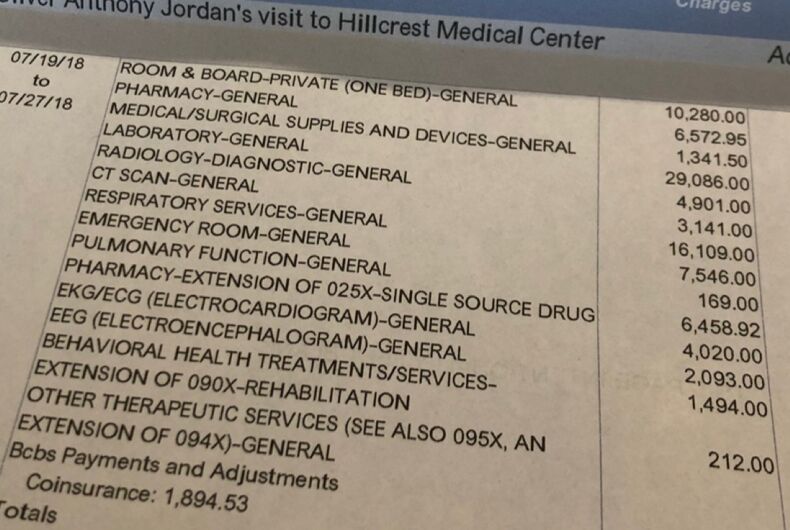 Oliver Jordan, a transgender man living in Tulsa, Oklahoma, tried to take his own life. He wasn’t successful, but a $93,000-dollar bill for medical care in the wake of his attempt has left him feeling hopeless.

Jordan posted a photo on Twitter of his itemized bill from Hillcrest Medical Center for an eight night stay last July. He titled his post, “This is how expensive it is to attempt suicide in the US.”

This is how expensive it is to attempt suicide in the US. pic.twitter.com/QHEzNcDeyB

He told the New York Post that, “for someone who couldn’t afford insurance, this would be utterly catastrophic.”

Jordan does have insurance thanks to his job as a legal assistant, and that knocked down his out-of-pocket expenses to a more reasonable — but still sizable — $2,850.

The cost of his stay is, sadly, not unusual. According to the Health Care Cost Institute, prices for Emergency Room car have been on the rise, with the average charge, as of 2016, being $1,322. That’s a 120% increase since 2009.

Of course, Jordan wasn’t considering the cost when he attempted to take his life last summer, but the bills he faces as a result, as well as bills since, is constantly causing him stress.

“Receiving bills and notices for something that will likely take me years to pay off is… disheartening,” said Jordan. “It leaves a hopeless feeling.”

Jordan is in better spirits about his life, however, but is also facing another financial hurdle due to medical costs. He is currently fundraising through GoFundMe to get top surgery, and has raised, as of this writing, $1,685 of his $6,000 goal.

His insurance will not cover this procedure, leaving him on the hook for the full amount this time.