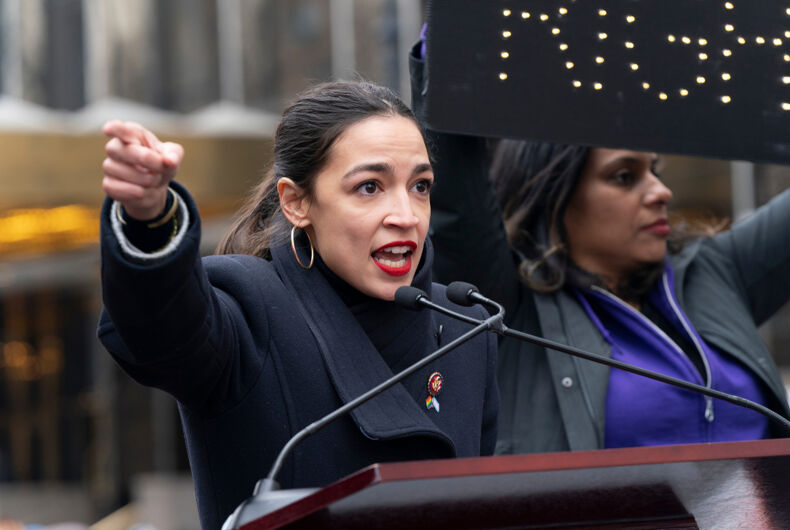 UPDATE: Manning was released from “administrative segregation” today and put into the general population shortly after this article published.

Representative Alexandria Ocasio-Cortez (D-NY) has called for the release of Chelsea Manning from a jail in Alexandria, Virginia.

Piggybacking on a Tweet quoting her speaking out against injustice, Ocasio-Cortez said, “Related: Chelsea Manning has been trapped in solitary confinement for refusing to answer questions before a Grand Jury.” She then added, “Solitary confinement is torture.”

Ocasio-Cortez  concluded, saying, “Chelsea is being tortured for whistleblowing, she should be released on bail, and we should ban extended solitary in the US.”

Manning was subpoenaed in February of this year to testify in a case against Julian Assange and Wilikeaks. Protesting the secret nature of the trial in question, Manning announced that she would avoid testifying.

“I object strenuously to this subpoena, and to the grand jury process in general,” said Manning to the Washington Post. “We’ve seen this power abused countless times to target political speech. I have nothing to contribute to this case and I resent being forced to endanger myself by participating in this predatory practice.”

Manning was sent to prison for contempt of court and jailed on March 8. Her release is conditioned on her testifying before the grand jury. Manning has been held in administrative segregation since she was jailed.

“We condemn the solitary confinement that Chelsea Manning has been subjected to during her incarceration at William G. Truesdale Adult Detention Center,” read a statement from the Chelsea Resists! support group.

“Chelsea can’t be out of her cell while any other prisoners are out, so she cannot talk to other people, or visit the law library, and has no access to books or reading material,” added the release. “She has not been outside for 16 days. She is permitted to make phone calls and move about outside her cell between 1 and 3 a.m.”

The sheriff of the jail, Dana Lawhorne, disputes that Manning is being held in solitary confinement.

“Our facility does not have ’solitary confinement’ and inmates housed in administrative segregation for safety and security reasons still have access to social visits, books, recreation, and break time outside their cells,” Lawhorne told CNN.

Related: Chelsea Manning has been trapped in solitary confinement for refusing to answer questions before a Grand Jury.

Chelsea is being tortured for whistleblowing, she should be released on bail, and we should ban extended solitary in the US. https://t.co/95ef4xYt3k

Chelsea is in solitary confinement with very little contact with the outside world. Write to her or draw her a picture this week.

Pro tips/ideas: provide detailed imagery, copy a short story from a book or lyrics to a song, cover a news story #ChelseaResists pic.twitter.com/B34rrfs1oQ