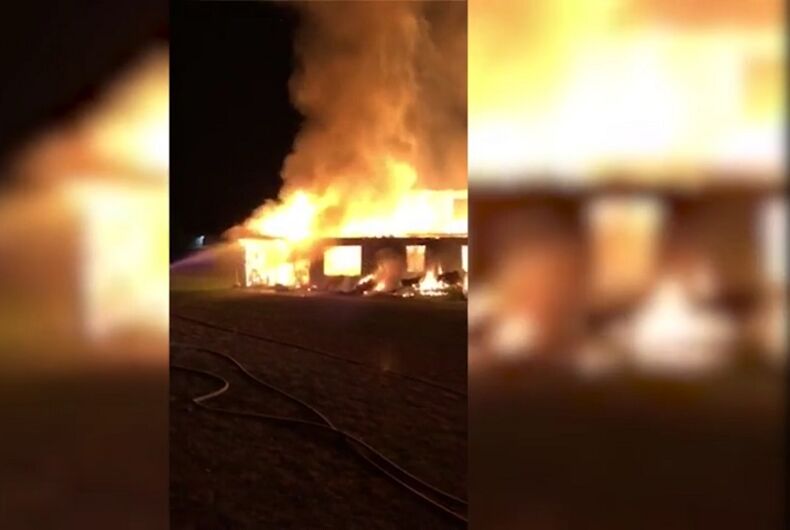 A civil rights institution in Tennessee was burned down and a white supremacist symbol was found near the building.

The Highlander Research and Education Center is an iconic social justice leadership training school that was founded in 1932 and provided training for many leaders in the Civil Rights Movement, including Rosa Parks and John Lewis.

It moved to its current location east of Knoxville in 1972 and works to help grassroots organizing to this day.

The fire, which started last Friday morning, destroyed the Highlander Center’s main building, along with decades worth of historical documents and artifacts.

Authorities said that a “hashtag symbol” was found painted near the site of the fire. A spokesperson for the Highlander Center said it looked like “a tic-tac-toe board.”

“But it has been used by individuals in the past. We have seen this symbol associated with different groups.”

“While we do not know the names of the culprits, we know that the white power movement has been increasing and consolidating power across the South, across this nation, and globally,” the Highlander Center posted on Facebook.

The Southern Poverty Law Center said that there has been a surge in white supremacist activity since Donald Trump announced his 2016 campaign, and that in 2018 Tennessee had 36 active hate groups.

The neo-Nazi group Traditionalist Worker Party has held several rallies in the state in 2017 and 2018 and has plans for another.

In 2010, the Highlander Center hosted a retreat for LGBTQ activists. A couple of months later, the organization GetEQUAL was formed.

It’s time for our people to hear more from us.What we know:As most of you know, a devastating fire burned down our…