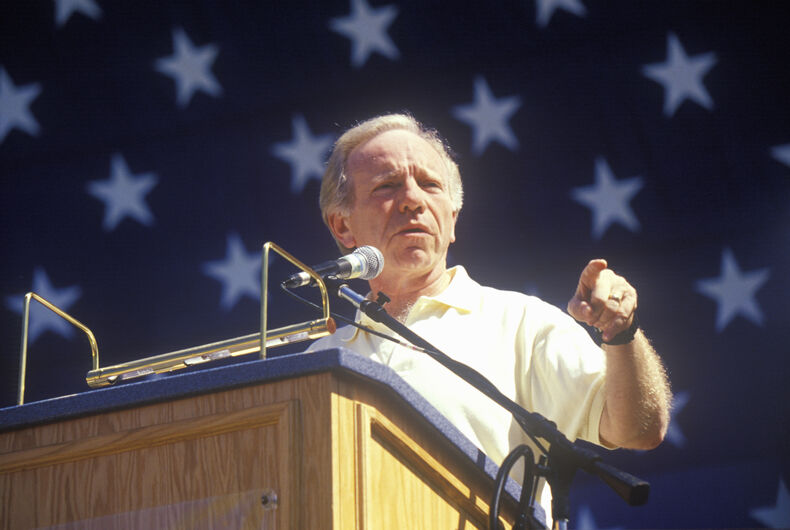 Senator Joe Lieberman campaigns for vice president during a rally at California State University at Fresno in 2000.Photo: Shutterstock

Former Democratic vice presidential candidate and general curmudgeon Joe Lieberman is a former Senator best known for bucking his party by supporting conservative positions. So it’s no surprise the man who left the party to become an “independent” has thoughts on newly elected liberal Congresswoman Alexandria Ocasio-Cortez.

Ocasio-Cortez, who describes herself as a “democratic socialist” has become the face of a new younger and more “woke” demographic focused on fixing systemic problems in the country. She’s pro-labor, pro-equality, supports taxing the ultra-rich to pay for vital government programs and infrastructure, and champions the working class and minorities.

Related: GOP plan to keep attacking Democrats for being cool continues to backfire

“With all respect, I certainly hope she’s not the future and I don’t believe she is,” Lieberman said during a spot on Fox Business News.

Ocasio-Cortez, the left’s version of Donald Trump when it comes to social media savvy, quickly shot back an epic burn on Twitter.

Lieberman, perennial grumpy old man that he is, probably won’t even catch the reference.

Twitter, with its younger-than-1000-years-old demographic, doubled over with laughter at Ocasio-Cortez’s clapback at the former Senator.

Ocasio-Cortez and everyone born after 1985: “Who in the hell is Joe Lieberman?” https://t.co/DJYrDyawPC

Joe Lieberman isn't even a Democrat anymore, so why doesn't he join in a shuttered diner for a cup of steaming hot STFU all the other non-Democrats who have Big Thoughts about the future of a party to which they don't belong.

Live your life in a way that makes Joe Lieberman say you're not the future.

Joe Lieberman looks a lot like Emperor Palpatine and quite frankly that makes a lot of sense pic.twitter.com/tPhyJgsuXm

Every time there's a new Joe Lieberman thing going around I think of this @SenSherrodBrown quote: “I don’t know any Democrat who cares what Joe Lieberman thinks, to be honest with you. I really don’t.”https://t.co/FZMxoRVf2u

I sure hope AOC’s response is “who the fuck is Joe Lieberman?”

Hilarious for Joe Lieberman to attack Ocasio. I mean, unlike Lieberman, Ocasio could win her primary.

No but seriously Joe Lieberman is the worst person in the world.