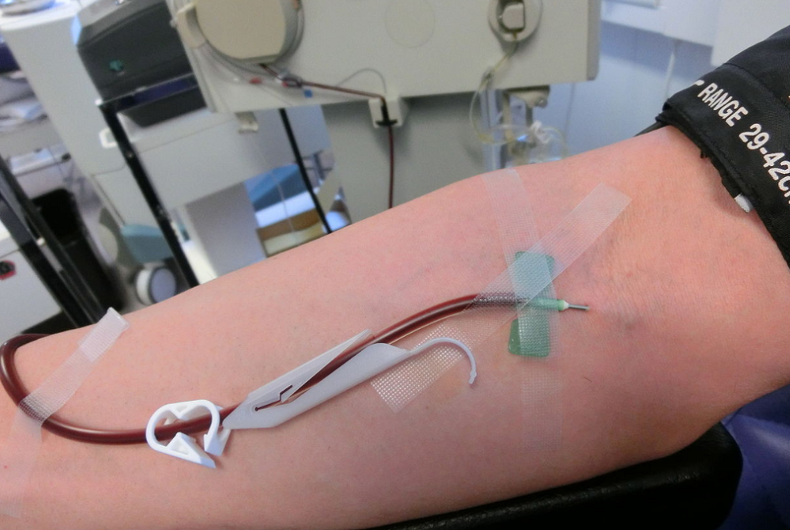 A plasma center turned away a transgender donor when she started identifying as a woman on their forms, possibly because of the FDA’s ban on gay men donating blood.

CSL Plasma pays people $30 for each donation, which meant that James could earn about $60 a week while she provided a life-saving material.

When she started to give plasma, the center required her to list her birth gender on the intake form, but as she continued to donate, she opted to list herself as female.

James is a transgender woman and doing so is consistent with who she is and how she lives.

In 2015, however, she entered her information into a donor kiosk as she had for years prior, only to find herself locked out of the system. An employee of CSL Plasma told her why: the company has a “flat-out ban” on donations from transgender people.

Related: The American Red Cross faces a critical blood shortage, but gay donors are being turned away

A year later, she filed a charge of discrimination against the CSL Plasma center with the Department of Human Rights. In 2017, the department determined that CSL Plasma likely discriminated against James.

CSL Plasma, however, refused to settle the case and kept their ban in place.

The ban has its roots in polices enacted by the U.S. Food and Drug Administration, which recommended in 1983 that men – in this case including transgender women –  who have had sex with multiple partners not donate.

In 1985, the guidelines were expanded, excluding men who had sex with men over a 10-year period. In 1992, the FDA recommended a lifetime ban.

The FDA regulates companies such as CSL Plasma.

The policy was softened a bit in December 2015, with the FDA asking donation sites to defer any male donor who has had sex with another man within the past year.

James, meanwhile, has said that she has never had sex with a man, but this hasn’t stopped CSL Plasma from turning her away.

She even attempted to donate plasma last year, after the Department of Human Rights ruled against CSL Plasma. Once again, James was turned away, with staff at their Minneapolis location telling James that she “should try to donate plasma at a vendor other than CSL.”

“CSL Plasma discriminated against James in a place of public accommodation on the basis of her sexual orientation,” reads the suit.

CSL Plasma, meanwhile, declares that they have “acted lawfully.”

“The state has made no efforts to discuss this matter with us in advance of filing its complaint,” said CSL Plasma spokesperson Robert Mitchell to the Duluth News Tribune.

“Nonetheless, we will work with the Department to resolve this matter or, if that is not possible, will vindicate our position in court.”

CSL claims that their policies have “evolved” since 2015.

“Since that time, CSL Plasma has put in place policies that support self-identification based on gender preference,” Mitchell said.

This doesn’t explain why James was still turned away in 2018 when she again attempted to donate.

The lawsuit is asking for compensation “in an amount up to three times the actual damages sustained as well as damages for mental anguish and suffering,” as well as a civil penalty and discrimination training for CSL Plasma employees.

Padma Lakshmi married 25 gay couples: ‘I have an extra anniversary to celebrate’