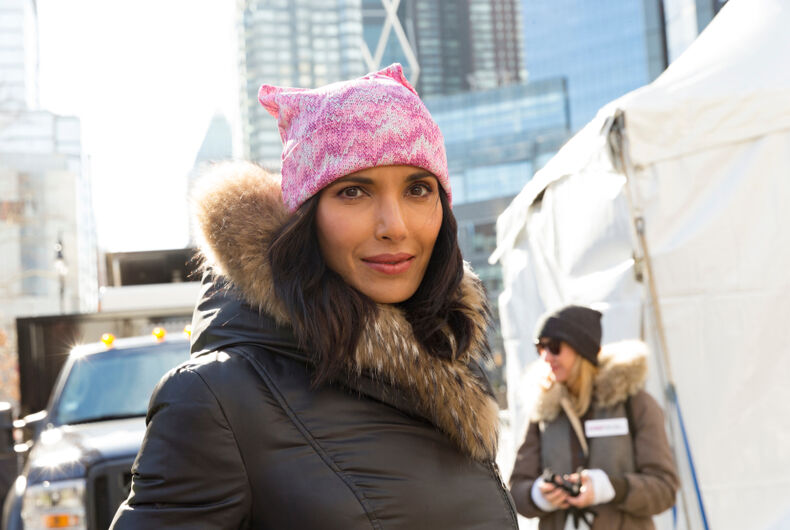 In an exclusive interview with LGBTQ Nation, ACLU ambassador and Top Chef co-host Padma Lakshmi provided a behind-the-scenes glimpse into one of her TV career highlights: officiating a mass wedding between 25 same-sex couples on Top Chef.

“You know, we actually filmed it before the Supreme Court case ruled for marriage equality,” Lakshmi told LGBTQ Nation during the 2019 SXSW Conference & Festivals in Austin, Texas.

“That was just our way of being defiant and having our voice heard. I thought it was a wonderful way to use the show to really talk about something that’s very important to all of us.”

The episode aired in January 2016 and featured some California couples who had gotten married between May and November of 2008, when California’s Supreme Court allowed same-sex marriages and Prop 8 later banned them.

“A lot of our [Top Chef] crew is gay and most of my circle as well. So, I was really happy they suggested it and I was excited to be able to perform,” Lakshmi said.

She revealed that she got officially ordained in both California and later on in New York so that she could marry another same-sex couple who are very dear friends of hers.

“I only marry gay people,” she laughed. “I’ve never married a straight person in my life.”

“Three years later,” she continued, “I still have people who come up to me and say, ‘You married us,’ or send me little messages on social media saying, ‘We’re still going strong, and happy anniversary!’ So I feel like I have an extra anniversary to celebrate with all these couples sprinkled around the country.”

In a 2016 interview, Lakshmi discussed her admiration of the female body, sharing that she has had a physical encounter with another woman, though she considers herself “a heterosexual woman mostly.”

Lakshmi spoke alongside Anthony Romero, executive director of the ACLU, on a SXSW panel entitled Making Change On and Off the Screen. The discussion covered the increasing expectation that celebrities use their platforms to speak out against oppression and injustice, and how that plays out in real life.

Lakshmi tells LGBTQ Nation, “[The ACLU] was always an organization that was on my radar, but with what happened a couple of years ago and with all the immigration stuff, I felt like I had to do something. They reached out to me, and I was so flattered and excited.”

Her involvement began with a telethon and has since expanded to speaking openly about the group’s advocacy for immigrants, women’s rights and other issues.

“I love working with them,” she says. “I’m an immigrant, so it’s an issue that’s very personal and important to me. And as a mother, I just can’t imagine what those people are feeling like and how cruel this whole process is.”

Lakshmi was born in India, and expressed her love for the ACLU’s work protecting a variety of human rights including reproductive justice, LGBTQ rights and labor rights.

“[The ACLU] really just is to provide legal support for those who are the underdog and can’t afford it so that all of us have equal rights under the law in the Constitution.”

At SXSW 2019, the ACLU also kicked off a national tour to mark its 100 years of defending civil rights and civil liberties. The tour features “interactive exhibitions about voting rights, immigrants’ rights, and mass incarceration,” is free and open to all ages, and will visit 15 American cities between now and June.

In a statement about the tour, the ACLU said, “[Our] staff has doubled since Trump took office, [our] membership and social media following have more than quadrupled. Leading up to the 2020 presidential election, the ACLU will use its expanded membership to shape the race around civil liberties and civil rights.”

Here is video of LGBTQ Nation‘s interview with Padma Lakshmi: