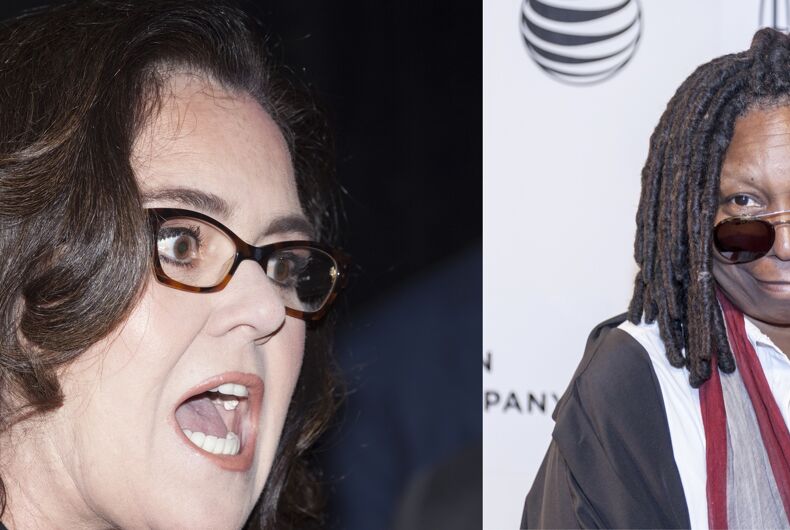 Rosie O’Donnell is spilling the beans about working with Whoopi Goldberg on “The View” and she’s not holding back.

“Whoopi Goldberg was as mean as anyone has ever been on television to me, personally—while I was sitting there,” O’Donnell told Ramin Setoodeh for the new tell-all book Ladies Who Punch: The Explosive Inside Story of The View. “Worse than Fox News. The worst experience I’ve ever had on live television was interacting with her.”

“Some people would say, ‘What’s going on with you and Whoopi?'” O’Donnell recalls. “I was like, ‘Are you watching the show? It’s pretty much right there.’ I have no desire for a public feud.”

Related: Rosie O’Donnell is a grandma now & her grandbaby is freakin’ adorable

She also said Goldberg was a personal hero before they worked together on the show.

“She’s a minority, feminist, smart, funny, groundbreaking legend who is black in America,” O’Donnell says. “I’m never going to not have respect for Whoopi Goldberg. But that was a painful experience, personally and professionally.”

Also in the book, O’Donnell admitted to having a friendly crush on Elisabeth Hasselbeck, who was also a View co-host, even though that season was much better known for its fights between the liberal O’Donnell and the conservative Hasselbeck.

“But not that I wanted to kiss her,” O’Donnell said in the book. “I wanted to support, raise, elevate her, like she was the freshman star shortstop and I was the captain of the team.”

Hasselbeck, who is now a co-host on Fox & Friends, responded to O’Donnell’s words, calling them “offensive” and “disturbing.”

“I’ll be very honest,” Hasselbeck said. “I read it and I immediately started praying.”

“But, more than that, just like I would pray for my friends, I hope that she has the peace of God,” she concluded, saying that she “forgives” O’Donnell.

“Because Rosie O’Donnell is still seen and known and loved by God, and I hope that she feels that and I hope that she can find, ultimately, the peace. Even more than I want to be at peace with her, I hope she finds that peace because God wants that for her too.”

A report on LGBTQ home ownership uncovered some hard truths