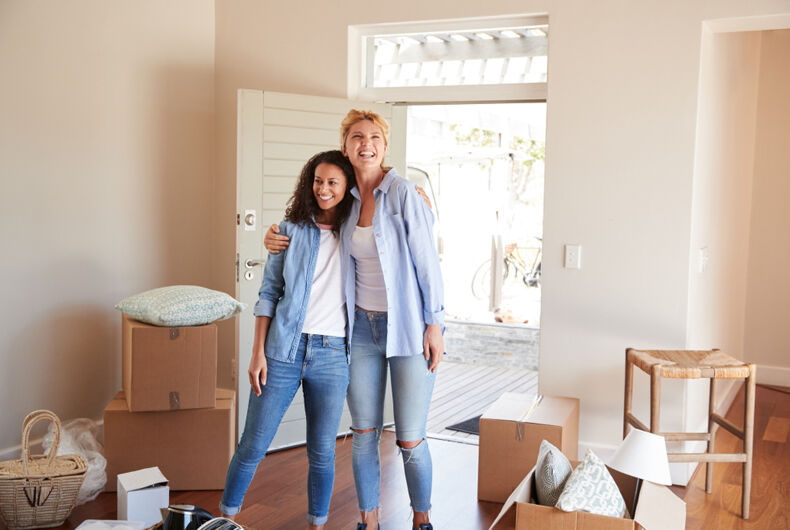 A report prepared by the National Association of Gay and Lesbian Real Estate Professionals (NAGLREP) in conjunction with Freddie Mac, The LGBT Community: Buying and Renting Homes Report, uncovered some hard truths about LGBTQ home ownership: while 65% of Americans, on average, own a home, only 49% of LGBTQ people have taken the plunge.

The organization reached out to their 2,300 members to examine the attitudes amongst their LGBTQ customers, as well as their expectations in the future.

“This year’s commemoration of the 50th anniversary of the Stonewall Riots, which launched the modern LGBT movement, showcases the strides the community has made and the challenges we still face, including housing discrimination,” said NAGLREP founder Jeff Berger.

The report, released in advance of the LGBT Housing Policy Summit coming in Washington, D.C. this April, also found that a majority of LGBTQ renters fear discrimination during the home buying process. The majority of those — 44% — are anxious about just how welcoming their new neighbors will be, while 40% also worry about the community’s reaction if they opted to start a family.

There is a bright spot, however: the reintroduction of the Equality Act in Congress could have a strong impact on LGBTQ home ownership. 22% of NAGLREP members expect the passage of the Equality Act could lead to a jump in LGBTQ home ownership of roughly 5-9%. An additional 25% of NAGLREP members were even more enthusiastic, expecting an increase of 10% or more.

“The Equality Act was recently re-introduced in Congress, and if passed would amend the Civil Rights Act of 1964 to prohibit discrimination on the basis of sexual orientation and gender identity in employment, housing, public accommodations, public education, federal funding, credit and the jury system,” said Berger.

“NAGLREP members believe removing housing discrimination as a barrier of entry would pave the way for substantial LGBT homeownership increases.”

“At the same time, 58% of our members believe the current White House administration’s policies on LGBT issues are having a negative impact on the community’s confidence to buy or sell a home,” added Berger.

The Supreme Court’s ruling in Obergefell v. Hodges in 2015 was also cited for improving home sales to LGBTQ couples: 55% of NAGLREP feel that more LGBTQ people have purchased homes in the wake of the Obergefell decision, a number that has grown stronger over the last two years.

Finally, 95% of LGBTQ homebuyers felt that a lack of LGBTQ violence was a primary concern when choosing a neighborhood, with many citing a low violent crime rate and LGBTQ-inclusive anti-discrimination laws as important considerations in their home buying decisions.