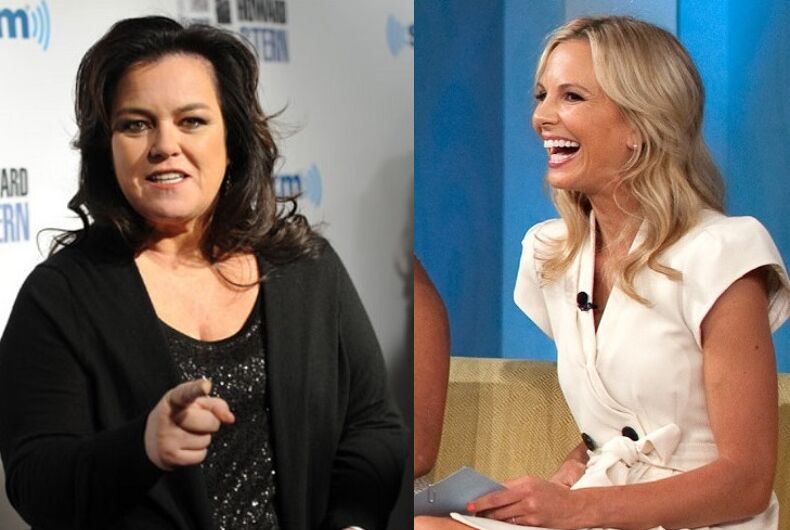 Fox News host Elisabeth Hasselbeck said that Rosie O’Donnell’s confession of a crush on her is “offensive” and said that she is praying for O’Donnell.

In a new book entitled Ladies Who Punch: The Explosive Inside Story of ‘The View’ by Ramin Setoodeh says that O’Donnell, who was a co-host of The View in its 2006-2007 season, admitted to having a crush on Hasselbeck, who was also a View co-host, even though that season was much better known for its fights between the liberal O’Donnell and the conservative Hasselbeck.

“But not that I wanted to kiss her,” O’Donnell said in the book. “I wanted to support, raise, elevate her, like she was the freshman star shortstop and I was the captain of the team.”

She also speculated that Hasselbeck was herself “at least a little bit gay” because the conservative was the captain of her college’s softball team for two years.

Related: Rosie O’Donnell got engaged to a police officer

O’Donnell said that was why she was hurt that Hasselbeck wouldn’t stand up for her as conservatives attacked her opposition to the Iraq War.

“The fight that we had, to me as a gay woman, it felt like this: ‘You don’t love me as much as I love you,'” O’Donnell said in the book.

Hasselbeck, who is now a co-host on Fox & Friends, responded to O’Donnell’s words, calling them “offensive” and “disturbing.”

“I’ll be very honest,” Hasselbeck said. “I read it and I immediately started praying.”

“I just started praying. And I pray now the Holy Spirit gives me the words to articulate this, but I think it can be addressed with both truth and grace.”

She said that if O’Donnell were a man that this would be a clear case of “objectification of women in the workplace,” even though she didn’t really explain how O’Donnell’s words years after they worked together created a hostile work environment.

She also responded to O’Donnell saying that she’s gay because she played college softball, calling it “an unfair stereotype.”

“But, more than that, just like I would pray for my friends, I hope that she has the peace of God,” she concluded, saying that she “forgives” O’Donnell.

“Because Rosie O’Donnell is still seen and known and loved by God, and I hope that she feels that and I hope that she can find, ultimately, the peace. Even more than I want to be at peace with her, I hope she finds that peace because God wants that for her too.”

Anyone afraid of losing their sight should see this film by a gay, visually impaired filmmaker