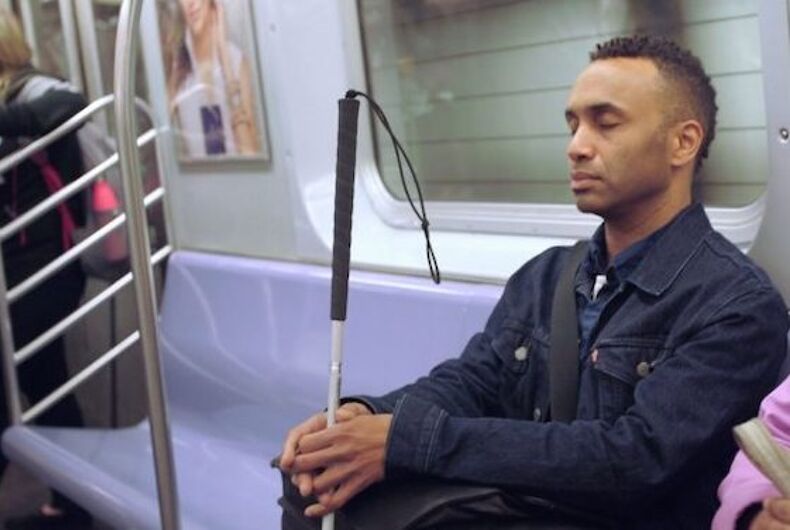 When 48-year-old director Rodney Evans began losing his sight in 1996, a doctor informed him that he had retinitis pigmentosa, a rare genetic disorder that affects fewer than one in 200,000 Americans each year.

Evans had won awards and acclaim for his films Brother to Brother, about a male art student who develops a relationship with a male Harlem Renaissance poet, and The Happy Sad, about two Brooklyn couples that experiment with openness and same-sex romance.

As a filmmaker, he grew more afraid as his eyesight gradually weakened. His visual perception currently hovers around 9 percent. He sees “like a horse with blinders,” only able to view things placed right in front of him.

To better understand what his future as a blind artist might hold, Evans made Vision Portraits, a documentary which examines himself and three other visually impaired artists: gay HIV-positive photographer John Dugdale; choreographer Kayla Hamilton; and writer Ryan Knighton.

Evans shot the documentary on two cameras, with himself viewing his wide angle shots on the camera’s display screen, and his crew members shot close-up details and in dark spaces that would’ve difficult for Evans. Vision Portraits premiered at the SXSW 2019 Festivals and Conferences this month. LGBTQ Nation saw it and spoke with Evans afterwards.

He wanted to avoid making a mere navel-gazing or talking-head marketing film that pitied its subjects or portrayed them as inspirational superheroes.

“Both of those poles are things I was hyper aware of and wanted to steer clear of,” Evans tells LGBTQ Nation, “because it’s painting people in black-and-white in a way that isn’t three-dimensional, nuanced and authentic to their experiences.”

Evans says he struggled with whether to include himself in his documentary, essentially outing himself as visually impaired. “I’m already within one of the most racist, homophonic industries that exists,” he says in his film. “It’s sort of like adding another element to an already difficult circumstance.”

“I was afraid of the stigmas and the way that might negatively affect future career possibilities,” he continued. “So, for a while I think that was definitely affecting my level of honesty: wondering whether or not people should know, whether or not I felt comfortable in public with a cane because someone in the industry might see me. And then it just becomes so exhausting that it’s no longer tenable.”

Dugdale, who began losing his sight after having a stroke, has assistants help frame his photographs and uses words to help describe his composition, focusing in on each shot with the shutter. He says sometimes it’s not just about the shot composition or spectacle, but about the idea itself and how it’s put together to form a vision.

Far from describing blindness as a dark and lonely place, Dugdale describes blindness as an “aurora borealis of color galore, of shooting stars and a Milky Way of souls eruptions.” Evans manages to re-create what Dugdale and his other artists “see” through beautiful camerawork shooting through prisms, cracked glass and macro lenses.

Dugdale tells Evans that the constant worry of holding onto the last bit of sight is too troubling; Dugdale felt freer after losing his last bit of sight. Now that he’s blind, nobody gets older, their hair always looks great.

Hamilton calls dancing a physical memory, gesture and history that lives through us. She says the physical sensation of her movement is more important than how it looks and that her best dancing occurs when her eyes are closed.

Though her decreased vision makes it hard for her to synchronize with other dancers, she still has created original performances like Nearly Sighted and Dark Room Duet.

For a while, when she first started losing her sight, she would try and pretend that she could see better than she actually could. Now, she says, “Don’t pretend you can do something you can’t. Who are you pretending for?”

In this way, hiding a disability becomes a different sort of closet, full of its own fears and disempowering beliefs. Yes, developing a disability can seem frightening, but nearly one in five Americans have a disability, and Vision Portraits shows that disabled experiences are still full of life, beauty and fulfillment.

Knighton was 18 when his doctor told him he would start going blind very slowly. But he learned to fear blindness less as he began to write humorous stories about his experiences as a blind person. The writing helped him settle and gain mastery over the experience in a way that he hadn’t before.

His computer reads his stories back to him at a rate that allows him to simultaneously think as he listens. He also teaches English and non-fiction writing classes at Capilano University in Vancouver, Canada.

Here’s a clip of Evans speaking in Vision Portraits:

While Evans worries that prospective partners will look at him as a burden or assume they’ll have to be a caretaker, something people don’t always want in a relationship, Knighton reminds him that that his attitude towards his own blindness affects other people’s attitudes.

If disabled people can explain how they can compensate for their different abilities, then it makes others feel more confident that they (and everyone else) will be able to deal with it.

Evans tells LGBTQ Nation that he hopes his film will contribute to a larger public advocacy of including people with disabilities into our communities.

“And more often than not, that’s not true. And so, this film is challenging that assumption … and exposing those kind of attitudes in a way that is very direct and very much my truth as an openly gay black man in the LGBTQ community.”