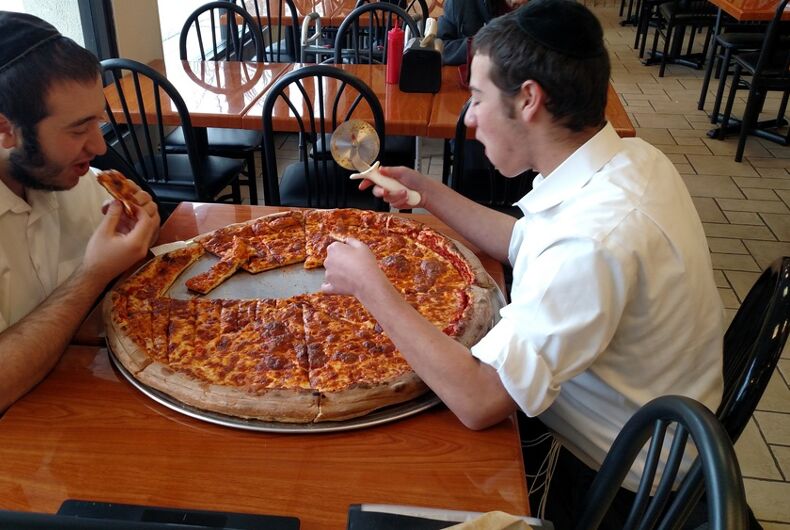 A gay Rabbinical student won nearly $5,000 in damages last week after being turned away at a Jerusalem pizzeria because of his sexual orientation.

Sammy Kanter claims he was denied service at Ben Yehuda 2 in August 2018 after an employee noticed he was wearing a t-shirt which read “CINCY”—a reference to his hometown of Cincinnati, Ohio—in rainbow letters. “Atah homo?” the worker behind the counter allegedly asked. When Kanter responded that he is, in fact, a gay man, he says he was asked to leave.

“He said ‘out’ and pointed at the door,” the 32-year-old wrote in a Facebook post that rapidly went viral. “My jaw dropped.”

After suing for $9,100, a small claims court awarded Kanter $4,500 in February as a result of the discrimination he claims he experienced. It’s illegal to refuse service to individuals in Jerusalem for being lesbian, gay, or bisexual.

RELATED: A gay student says a pizzeria kicked him out for wearing a Pride T-shirt

The Israel Religious Action Center (IRAC), which aided Kanter in bringing his case to court, credited the student for “standing up for equality and justice in Israel.”

“They have used their time in Israel to prepare for the rabbinate not only by studying, but also by transforming Israeli society,” said IRAC Executive Director Anat Hoffman in a press release, referring also to Kanter’s classmates at the Hebrew Union College.

Although Hebrew Union College is based in Cincinnati, Kanter was studying in Israel for the year as part of his program.

In a statement to HuffPost, the student adds that he “was proud to take the fight public.” Saying he plans to donate his court settlement to charity, he will “continue fighting for religious equality, specifically for Reform Jews, here in Israel.”

While Israel is widely portrayed as tolerant on LGBTQ rights, Kanter’s case illustrates the enduring chasm between conservative Jerusalem—which is 20 percent Orthodox Jewish—and gay-friendly Tel Aviv. A teenager was killed and five others injured in 2015 during an attack on Jerusalem Pride. The assailant, Yishai Schlissel, stabbed three pridegoers nine years earlier.

A February report from the Affiliation for LGBTQ Equality in Israel found that a “homophobic attack occurs every 10 hours in Israel,” as Gay Star News previously reported.

Its record on LGBTQ legislation is equally mixed. Israel has recognized same-sex marriages performed abroad since 2006 and gay adoptions are legal. However, the removal of same-sex parents from legislation on surrogacy in July 2018 triggered a 60,000-strong protest on the streets of Tel Aviv.