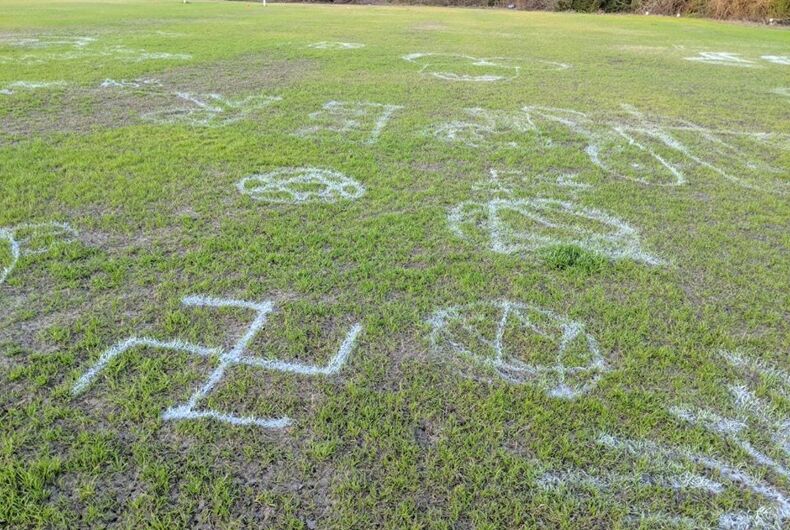 Whoever vandalized the field also signed the work “Lil’ Redd” alongside a drawing of a smiling face in a ball cap smoking a joint.

Cape Fear Rugby is an all-inclusive organization that loves and supports its community. Since 1974, we’ve called Wilmington our home. We’ve had members of all shapes, sizes, religion, sexual orientation, social class, and race. Fear Rugby members have been your neighbors, your family members, your friends, and your local politicians. WE LOVE WILMINGTON!

Although we hope to catch whoever did this to our pitch, we’re realistic, and know that it’s not going to be easy. Please consider sharing this in hopes of maybe catching the eye of someone that knows something about what happened.

Commenters have suggested that police investigate whether “Lil’ Redd” is the “tag” of a known local vandal. Indeed, the name has appeared on other local graffiti containing genitals and misspelled racial slurs.

Another commenter noted that the incorrectly drawn Jewish stars and other images—like a cross and the word “peace”—suggest that the vandal isn’t that bright.

Other regional rugby teams have also left comments of solidarity and support on the team’s Facebook page.

The team had just cleared up its field (or “pitch,” as it’s called) this last January, clearing away brush so they could practice safely for their 2019 season.

FBI data from November 2018 showed a recent rise in anti-Semitic hate crimes including vandalism. U.S. hate crime rates (including crimes against LGBTQ people) have been raising for the last three years.