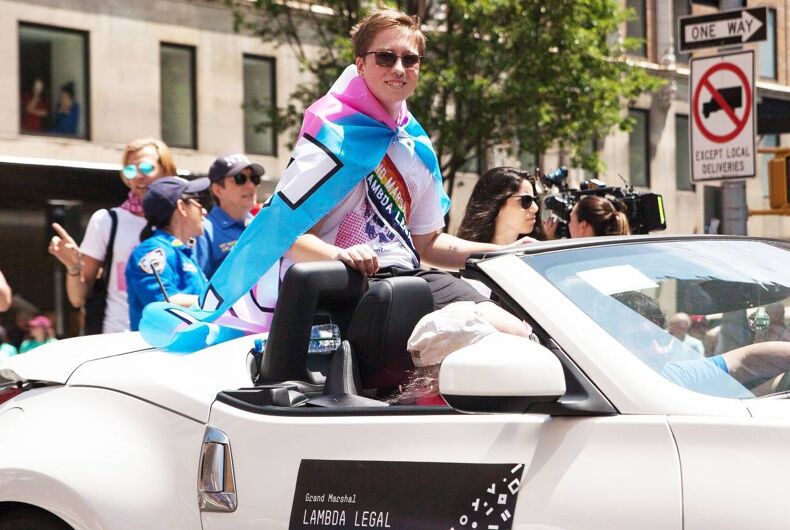 About 32 companies, including Apple and Microsoft, have signed onto an amicus brief supporting the rights of a transgender student in the Adams v. School Board of St. John’s County Florida case.

The lawsuit concerns Drew Adams, a transgender boy who was denied access to the boys’ restroom at his high school.

Adams has been presenting as male since 2015 and was allowed to use the appropriate facilities during his freshman year. But after an anonymous complaint, he was told he’d have to use only a gender-neutral restroom on campus.

Adams, via Lambda Legal, sued the St. Johns County School Board of St. Augustine, Florida, claiming that they violated the Equal Protection clause of the U.S. Constitution’s 14th amendment. In barring him from using the boys’ restroom, they violated his right to receive equal treatment under the law.

On July 26, 2018, Adams won his case in U.S. District Court, but the school district is appealing to the 11th District Court of Appeals.

To support Adams, an amicus brief—also known as a “friend of the court” brief—was authored by law firm BakerHostetler, and signed by 32 tech, health care and other firms.

The brief argues that the policy, if upheld, would harm the transgender employees of their companies, as well as those who are parents of transgender children. They further argue that such a transphobic policy would harm their ability to build and maintain a diverse and inclusive workplace.

Several of these companies also took to their social media accounts to highlight their support of transgender people and announce their involvement in the brief.

We were proud to file an amicus brief with @HRC and more than 30 companies in support of transgender students. Learn more how we’re taking action to #ProtectTransKids. https://t.co/xMo8dtupNt pic.twitter.com/aRLqRphsZT

This week we filed an amicus brief with @HRC to #ProtectTransKids like Drew Adams. Learn more about how we're taking action: https://t.co/3gq0eJj5ow

GitHub is proud to file an amicus brief to #ProtectTransKids with @HRC and over 30 companies. Diversity and inclusion are essential to our businesses—and to creating innovation and opportunity for all current and future software developers: https://t.co/qknzWaurUH https://t.co/4Pwr8pNbam

We were proud to join @HRC to take a stand for transgender students everywhere. #ProtectTransKids https://t.co/O9aukqoymH

We are proud to file an amicus brief with @HRC and more than 30 companies in support of transgender students. Learn more on how we’re taking action to #ProtectTransKids. https://t.co/F06sIX0oiK