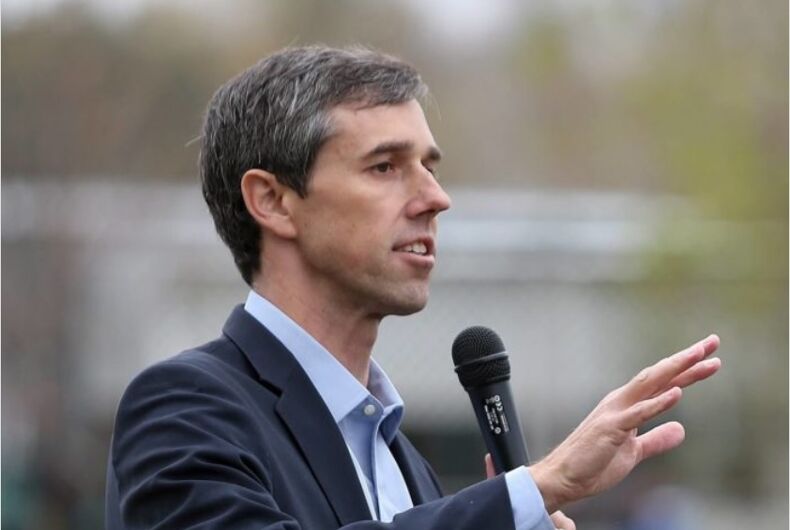 After months of mixed signals, Beto O’Rourke has made it official: he’s joining the 15 other Democrats running for president.

O’Rourke is hoping to capitalize on the enthusiasm from his Senate campaign against creepy Ted Cruz last year. Cruz narrowly won his re-election race, but by a far smaller margin than anyone would have expected for a Republican in Texas.

Some of the close scare for Cruz was the result of his own repugnant personality, which turns off even fellow Republicans. But a lot had to do with O’Rourke.

At 46, O’Rourke comes across as representing a new generation in politics. Cruz’s attempts to make fun of O’Rourke’s past as the member of a punk rock band only underscored how different O’Rourke is from the rest of the pack. He’s a social media star, chronicling his travels and even his visits to the dentist.

In short, O’Rourke isn’t your average Democratic politician. The question is whether that plays to his advantage or not.

In a crowded field, O’Rourke already stands out for his star power, which certainly gives him a leg up.

His age distinguishes him from the gray eminences that are in the top tier: Bernie Sanders, Elizabeth Warren and (presumably) Joe Biden. For Democrats looking for a generational change, O’Rourke has a lot to offer.

What he doesn’t bring to his race is a lot of experience. Ten years ago, O’Rourke was a member of the El Paso City Council. He was elected to Congress in 2012 and served three terms, stepping down to run for Senate. He doesn’t have much of a legislative record to his name, and he hasn’t been trying to impress wonks with detailed policy proposals.

O’Rourke does have a good track record on LGBTQ issues. As a member of the El Paso City Council, he pushed for domestic partnership benefits, which he says was “a very unpopular and politically inconvenient issue.”

In Congress, he was solid, earning an 85% score from the Human Rights Campaign for his final term.

In many ways, O’Rourke is a charismatic blank slate. His voting record is more moderate than his followers’ enthusiasm would suggest. But as his campaign last year (and his money-raising prowess) proves, people may just wanted someone who doesn’t fit the mold.

The only other candidate who compares to O’Rourke is Pete Buttigieg, the gay mayor of South Bend, Indiana. Buttigieg has been wowing audiences and pundits alike lately for his plain talk and grasp of policy details.

Buttigieg, who at 37 is even younger than O’Rourke, comes across as down to earth, but also as more serious (no streaming from the dentist’s chair).

Buttigieg is a veteran of the war in Afghanistan. O’Rourke not only has his Instragram musings to defend, but also a DUI arrest as a young man.

Still, O’Rourke is terrific on the campaign trail. For Democrats, the number one priority is finding the candidate who can defeat Trump. As O’Rourke proved last year, being a great candidate goes a long way at the ballot box. The question is going to be whether it goes far enough.