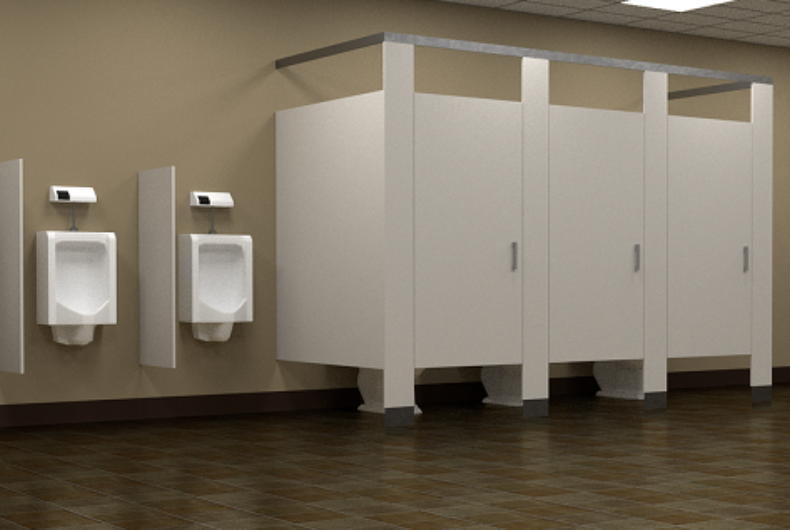 A school administrator who was suspended after he demanded to watch a transgender student use the restroom is back on the job, and the school hasn’t done much to address the problem.

This past December, Liberty High School Assistant Principal Lee Livengood made headlines when he was accused of berating a transgender student and saying that the student freaked him out.

Livengood was ultimately suspended for the incident, but he is reportedly back on the job after the brief, partly paid suspension.

Now the ACLU of West Virginia is speaking out, saying that Harrison County Schools isn’t living up to its promises of reform.

Michael Critchfield, 15, was using the boys’ room after school when Livengood entered and told him to “come out here and use the urinal” to prove that he belongs there.

“If you can’t use this urinal, then you shouldn’t be in here,” Critchfield said Livengood shouted. “What if a student said you were checking them out in here?”

A parent heard the shouting and went to check on the situation, and Livengood said that it was a “misunderstanding.”

“I was like breaking down crying from all the stress,” Critchfield said. “I was very anxious and frustrated. He wouldn’t let me talk. It was very traumatizing.”

The school did nothing to address the situation until the family sought help from the ACLU of West Virginia.

After the story got media attention, Livengood was suspended.

In January, Livengood was reinstated and the ACLU announced that an agreement was reached with the school district.

But the ACLU said that the district isn’t living up to the agreement. For example, the school has yet to start a faculty-sponsored GSA.

They also refused to adopt a transgender student policy that doesn’t involve outing kids to their parents, according to the ACLU.

The district insisted that a policy that involved calling a transgender student by their name and using the correct pronouns would have to involve parental notification.

Last, Livengood was supposed to write a letter of apology to Critchfield. That letter, though, was only two sentences long and only mentioned raising his voice.

“I’m deeply sorry for raising my voice while in the bathroom on 11/27/18,” the letter states. “I promise it won’t happen again.”

Loree Stark, the legal director of the ACLU of West Virginia, told NewNowNext that Livengood is even supervising Critchfield’s lunch hour.

“He shouldn’t be in the same room as Michael, ever,” Stark said. “This is was a very traumatic incident.”

“I refuse to allow the Board of Education and Assistant Principal Livengood to sweep what happened to me under the rug,” Critchfield said in a statement.

“Since the incident in the bathroom, I have seen little effort from the administration to create real change and ensure this never happens again.”

The ACLU of West Virginia has started a petition demanding “justice” for Critchfield.