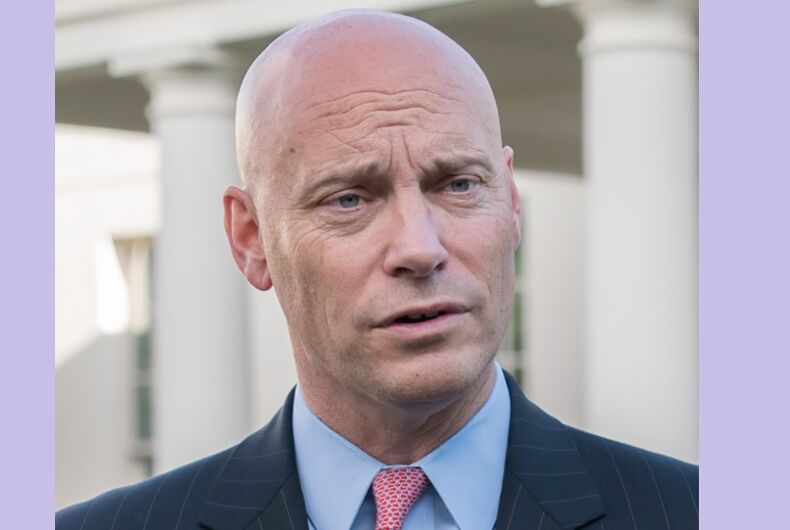 Mike Pence’s incoming chief of staff Marc Short has come under fire for a homophobic column he wrote about a man living with HIV.

Writing in his college newspaper at Washington & Lee University in Virginia, Short denounced, “the propaganda campaign ignited by gay activists and carelessly perpetuated by journalists whose intent is to scare all heterosexuals into believing they are prime targets for” HIV and AIDS.

“The campaign’s purpose is both to lobby Congress for more federal funding of AIDS research and to destigmatize the perverted lifestyles homosexuals pursue.”

The column, entitled “AIDS & The Heterosexual,” appeared in The Spectator, a student newspaper that Short co-founded and edited. He worked on the paper from 1989 to 1992.

Related: On the day of his funeral, let’s remember the queers who fought back against George H.W. Bush

His column was ostensibly a response to an interview that appeared in the main student newspaper with Edwin Wright, a Washington & Lee alum who talked about watching several of his friends die from complications from AIDS and his own pending death.

“Rhetoric like that killed us,” said Peter Staley, an ACT-UP activist who appeared in the documentary How to Survive a Plague.

“Guys like him wanted us to die. And they had an effect.”

Pence has yet to comment on Short’s column. Pence himself has a long history of opposing LGBTQ rights both in the U.S. House and as governor of Indiana, even supporting federal funding for conversion therapy in 2000 as a means to fight HIV.

Short was previously Donald Trump’s chief congressional liaison and the president of Freedom Partners, an organization funded by the Koch brothers.

In a statement yesterday, he said, “I regret using language as an undergraduate college student that was not reflective of the respect I try to show others today.”

“We have all learned a lot about AIDS over the past 30 years and my heart goes out to all the victims of this terrible disease.”

“His boss is responsible for enabling the single worst outbreak of HIV and AIDS in the history of Indiana due to his irresponsible and universally-criticized effort to end funding for needle exchange programs and HIV and AIDS testing centers. Mike Pence has spent his career attacking LGBTQ people and building a record of undermining HIV awareness and prevention initiatives.”

“After all this and being in the inner circle of Mike Pence for the past decade, the hiring of Marc Short is not surprising.”