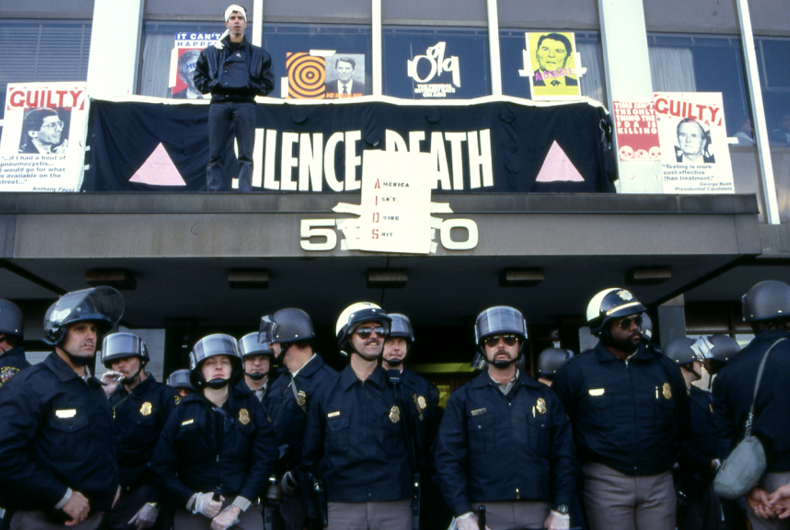 It was Sunday, September 1, 1991, the day before Labor Day. George Herbert Walker Bush was about to start formally running for a second presidential term. From across the northeastern United States, ACT UP members were traveling to Kennebunkport, Maine, a stereotypically quaint village where the Bush family owned an estate.

We were going to march through the town as far as we could to the winding driveway that marked their compound. And then we would have a political funeral, in which many of us would go limp and be gently placed on the road, standing in for the bodies of so many who had died of AIDS during the years of Republican neglect.

Our signs read, “114,000 AIDS Deaths. It’s Time for a National Plan, George,” with a photo of Bush looking at his watch.

It would be another 24 years and three presidential administrations — both Democratic and Republican — before the United States had its first HIV/AIDS plan.

Related: 30 years ago, they stormed the FDA & seized control. So where are they now?

We spent the night sleeping on the bus taking us from Philadelphia to Maine and pulled over for breakfast in the early morning, parking in the pre-determined lot where we’d agreed to convene. I ate my first lobster roll. It was delicious.

I don’t know how many of the people at that action died in the weeks and months after that action, before the election of Bill Clinton. Or how many died after, in the years more it took to get to effective combination therapy, or after that when even those powerful drugs couldn’t save them from the damage already done.

All of us there knew that this symbolic funeral was also a sacred act, an act of bearing witness as and with those of us who would not survive.

By the end of the next presidential term in 1996, many members of our group who were with us that day were dead, and I bore a sign with some of their names as we marched in Washington, D.C. from the AIDS Quilt display outside Congress to the White House, where we threw the real ashes of people who had died of AIDS across the fence onto the White House lawn.

I remember so much from the Kennebunkport action. I remember the feeling of drifting to sleep on that bus, the taste of that lobster roll, focusing on my breaths as I went limp in the arms of a comrade, and the rough feel of the road beneath my body.

I remember acutely how I willed myself to be limp and still, how I heard my own breath echoing in my ears.

Maybe I remember it so well because I ended up being featured in an Associated Press photo — me, a heterosexually married 23-year-old ACT UP member on the cusp of coming out — that ended up in the Philadelphia Inquirer and elsewhere, in a pre-digital era of far less imagery.

You can see me in my bleached-blonde hair and cat-eyed sunglasses in this 25-second news clip that my beloved friend Jose DeMarco posted on social media this week:

Why was I an evocative image for the still and motion camera? Is it that I look like a dead young white kid? A girl? Is it my level of limpness?

I can still feel the texture of the street underneath me where I was set down, more than I can feel what it feels like now to watch that video. Also, the person who lays me down then bends over and it looks like he’s about to make out with me, which would have been hot but inappropriate. I think maybe he gave me a kiss on the forehead.

Right after the protest, a bunch of us packed into a car and went further upstate into rural Maine to stay for a few days in a little cabin on a chain of lakes in a mill town, thanks to a friend whose family lived up there.

There were canoes and loons and a hand-cranked Victrola playing thick old records. And quilts. And I spent much of the time feeling out of my mind because I had such a big crush on a fellow ACT UP member, a bisexual woman who was there with us, and my husband (who was straight, as I ostensibly was at the time we’d gotten married when I was 19) was being distant. I left him within a few months after that.

I came home to intensive planning for a September 12 protest that united members of labor groups, reproductive rights activists, ACT UP, and others against a $1,000/plate dinner where Bush would support the campaign of Dick Thornburgh — a former Pennsylvania governor who had also served as attorney general under Reagan — for U.S. Senate.

About 3,000 people showed up at the Bellevue-Stratford Hotel that day. And a big chunk of the crowd was ACT UP and fellow queers. And in 1991, a queer contingent at a broad-based protest wasn’t necessarily welcomed by all. The atmosphere was already tense. I recall that it was later revealed that police had been told by Secret Service that ACT UP was known for throwing “AIDS-infected blood.”

ACT UP Philadelphia was confrontational as fuck. A later story in the local tabloid, the Philadelphia Daily News, referred to us as the “F-troop,” because of our propensity for cursing. One favorite chant was “Fuck, fuck, fuck with us, and we’ll fuck, fuck, fuck for you,” so I can’t really argue with them on that.

Our plan for the protest was to empty a fake coffin filled with fake ashes, made of bone ash and kitty litter. Well, I suppose bone ash is composed of real ashes, but not human ones. When two of our members slid the coffin under a police barricade by the front of the crowd, the police erupted, rioting on our section of the crowd.

Even though I know there’s a lot of missing history that’s not easily found on the Internet, I’m surprised I can’t find much of anything online about this. The police attacked us with clubs and their bodies. They drove their horses into the crowd. They cursed at us and called us faggots. They went after the media, grabbing their cameras and telling them to leave.

One gay man, who was a local restaurant owner and politically involved with the Democratic party in this Democratic-majority city, was left bleeding in the street, and no one was allowed to assist him.

Our members were threatened, bashed, and arrested.

I got knocked hard down onto my knees as I tried to un-arrest one of our members.

The fallout from that protest led to Philadelphia’s first independent investigation since the terrible MOVE bombing, and the police were put under a consent decree to not violate protester rights. A police oversight committee was formed.

And I was left thinking, “I’m getting gay-bashed, and I’m not even getting to have any queer sex.”

We had a little office in those days in the suite of attorney Larry Krasner, who went on to represent us in the investigation and lawsuit and is now the district attorney in Philadelphia.

In our office, we kept the names and phone numbers of those who wanted to bear witness to the riot on index cards in a little box. I looked up the phone number for a cute butch I’d been eyeing. The rest, as they say, is history.

Across the country, ACT UP persisted in making AIDS central in the election.

Thornburgh lost the election. So did Bush. I remember in the last days of the election, when it was pretty clear he was going to lose, he just looked so pissed. He called out ACT UP by name. I recall him saying, “I hate those guys,” but could that really be true?

Clinton became president and did some good things and some bad things. And then Bush’s son came in and did nothing good, except PEPFAR — but let’s not get into that now.

Bush was an elite fucking monster. He killed my friends, so many and so fast that I can’t even remember who they were. His son killed scores more. May his memory be a curse, and may our queer memories live on to infuse our futures with the possibilities he and his kind seek to destroy.

JD Davids, a longtime HIV/AIDS activist and communication strategist, is a consultant with the Transgender Strategy Center and a frequent collaborator with the Positive Women’s Network – USA. Formerly, he has served as senior editor and director of strategic communications at TheBody.com as well as executive director of Community HIV/AIDS Mobilization Project (CHAMP) and its HIV Prevention Justice Alliance (HIV PJA), among other efforts. He is working on a memoir.

This article is reprinted with permission from TheBody.com.

LGBTQ asylum seekers are facing more battles than others