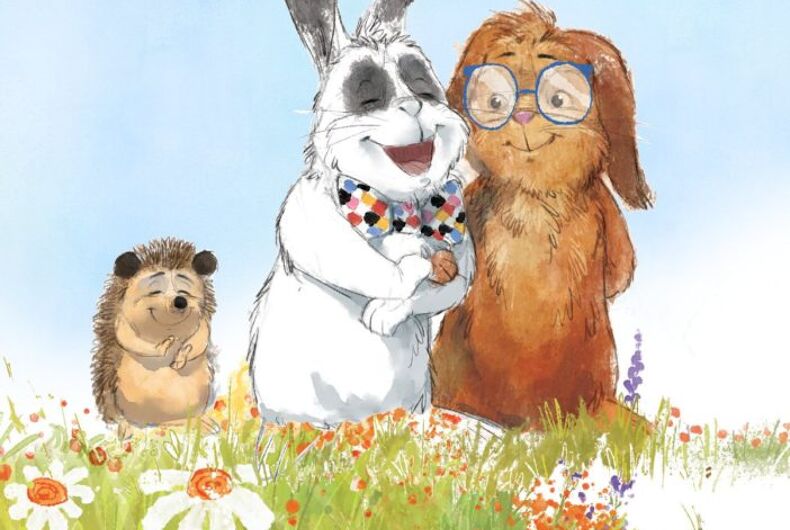 Photo: A Day in the Life of Marlon Bundo

Marlon Bundo, the family pet rabbit of Vice President Mike Pence, wife Karen, and daughter Charlotte, travels to the White House for a glorious time as he accompanies Mike throughout his day meeting people and going places with his famous owner. At the end of the day, they journey back home and pray together before retiring for the night.

Charlotte wrote and Karen Pence illustrated this fictional scenario in their children’s book Marlon Bundo’s Day in the Life of the Vice President, their real-life bunny rabbit. They donated proceeds to charity.

While originally conceived as a satire of the Pence book by John Oliver, host of the TV show Last Week Tonight and a former regular on The Daily Show on Comedy Central, A Day in the Life of Marlon Bundo, written by Oliver’s staff member, Jill Twiss, stands on its own as an age-appropriate adorable children’s book.

Proceeds go to support the Trevor Project and AIDS United.

So many people (and possibly even bunnies) have enjoyed this book that Oliver’s version has far out-soled the Pence edition. Charlotte bought and enjoyed it and her published was said to have welcomed it as well.

Related: Parents took over a school board meeting to support a gay teacher & his husband

But not everyone was so enamored. Some parents in the Seminole County, Florida elementary school district filed complaints against a first grade teacher at Pinecrest Elementary School who read A Day in the Life of Marlon Bundo to her class. The teacher currently remains at her position as school district administrators investigate.

Every year, the American Library Association announces its list of the most challenged and banned books in schools, libraries, and within the larger society. Annually, among this list are books with LGBTQ characters.

Throughout the United States, under the battle cry of “preserving traditional American family values,” conservative and theocratic forces attempt to prevent multicultural curricula from being instituted in the schools.

On the elementary school level related to LGBTQ themes, they target books like And Tango Makes Three, by Justin Richardson and Peter Parnell, a lovely true story about two male penguins in the New York City Central Park Zoo raising a baby penguin. Also, King and King, by Linda de Haan, about a king meeting his mate, another king.

Not so long ago, the right went berserk after Daddy’s Roommate written and illustrated by Michael Willlhoit, about a young boy who spends time with his father and father’s life partner, Frank, following the parents’ divorce, and Gloria Goes to Gay Pride by Lesléa Newman, with illustrations by Russell Crocker, a portrait of young Gloria who lives with her two mommies: Mama Rose, a mechanic, and Mama Grace, a nurse.

Just a few others include Heather Has Two Mommies by Lesléa Newman; Annie On My Mind by Nancy Garden; and The Drowning of Stephen Jones by Bette Greene.

My co-authored book with Diane Raymond, Looking at Gay and Lesbian Life (1988, 1993), the first text book on the topic, became the center of controversy in a Kansas City, Kansas school district. A high school English teacher included the book among others in a cabinet of reference books for her students to use in conducting research for their essays.

The school principal discovered our book and fired the teacher who sued the district to recover her job. The ACLU eventually won the suit, and the teacher was “allowed” to return to the classroom with the stipulation that she could not reenter her former school and had to teach in another district school.

“The Pen Is Mightier Than the Sword”

As stated by English author Edward Bulwer-Lytton in his 1839 play, Richelieu; Or the Conspiracy, “The pen is mightier than the sword,” this adage holds that the written word acts as a powerful tool in the transmission of ideas.

Why else would oppressive regimes and other avid enforcers of the status quo engage in censorship, book bans, and burnings throughout the ages?

A form of cultural imperialism for LGBTQ people, as is true for many ethnic and racial groups, is that they often grow up within an oppressive society depriving them of an historical context for their lives. The larger society perpetuates the myth that they have no culture and no history, and that they do not constitute a bona fide community.

A crucial point in the psychology of scapegoating is the representation of minoritized “others,” in historian John Boswell’s words, as “animals bent on the destruction of the children of the majority,” and dominant groups have long accused LGBTQ people of acting as dangerous predators concentrated on ensnaring, torturing, and devouring children of the dominant group.

John Boswell has documented the various means by which this falsification has been enacted to erase LGBTQ history. These sorts of discriminatory actions not only lead to the false conclusion that LGBT people have made no significant contributions to their societies, but also furthers the isolation and invisibility of these groups.

Boswell cites as an example of heterosexist censorship a manuscript of The Art of Love by the Roman author Ovid. A phrase that originally read, “A boys’ love appealed to me less” (Hoc est quod pueri tanger amore minus), was altered by a Medieval moralist to read, “A boy’s love appealed to me not at all” (Hoc est quod queri tanger amore nihil), and an editor’s note appearing in the margin informed the reader, “Thus you may be sure that Ovid was not a sodomite” (Ex hoc nota quod Ovidius non fuerit Sodomita).

One of the first instances of a change of gender pronouns occurred when, as Boswell stated, “Michelangelo’s grandnephew employed this means to render his uncle’s sonnets more acceptable to the public.”

We know about the figure of Sappho and her famed young women’s school on the Isle of Lesbos around the year 580 BCE, where we find the earliest known writings of love poems between women, and other important writings.

Unfortunately, only one complete poem and several poem fragments survived for us today after centuries of the Catholic Church’s concerted effort to extinguish the works of these extraordinary women. An order in 380 of St. Gregory of Nazianzus demanded the torching of Sappho’s poetry, and the remaining manuscripts were ordered by Papal Decree in 1073 to be destroyed.

Poet Walt Whitman’s book Leaves of Grass was published in 1860. The section titled “Calamus” was clearly homoerotic. Kalamos in Greek mythology turned into a reed in grief for his young male lover, Karpos, who drowned.

The Acorus calamus is the name given to a marsh plant. For Whitman, his “Calamus” poems represent the kind of love between Kalamos and Karpos. Very soon following the book’s publication, it was removed from library shelves at Harvard University and placed in locked cabinets with other books thought to undermine students’ morals. Whitman was fired from job at U.S. Department of the Interior.

Radcliffe Hall’s 1928 novel, The Well of Loneliness, involved a lesbian relationship, but soon after publication was declared “obscene” by officials in both England and the U.S., and was banned.

Storm troopers carried away and torched thousands of volumes of books and research documents calling the Institute “an international center of the white-slave trade” and “an unparalleled breading ground of dirt and filth.”

In the famous words of African American social activist Marcus Garvey: “A people without the knowledge of their past history, origin, and culture is like a tree without roots.”

The lives, stories, and histories of LGBTQ people have been intentionally hidden by socially dominant individuals and groups through neglect, deletions, erasures, omissions, bans, censorship, distortions, alterations, trivializations, change of pronouns signifying gender, and by other unauthorized means.

The California legislature passed, and Governor Jerry Brown signed into law in 2011, SB48, the first in the nation statute requiring the state Board of Education and local school districts to adopt textbooks and other educational materials in social studies courses that include contributions of LGBATIQ people.

While still in the early stages, other states are following this emerging and important trend. Primarily in academic environments, greater emphasis and discussion is centering on what has come to be called “queer theory” (an area of critical theory), where writers, educators, and students analyze and challenge current notions and categories of sexuality and gender constructions.

For LGBTQ people and allies, this information can underscore the fact that their feelings and desires are in no way unique, and that others like themselves lead happy and productive lives. This in turn can spare them years of needless alienation, denial, and suffering.

For heterosexual people, this can provide the basis for appreciation of human diversity and help to interrupt the chain of bullying and harassment toward people based on sexual identity and gender identity and expression. For all students, this content area has the potential to further engage students in the learning process from multiple perspectives.