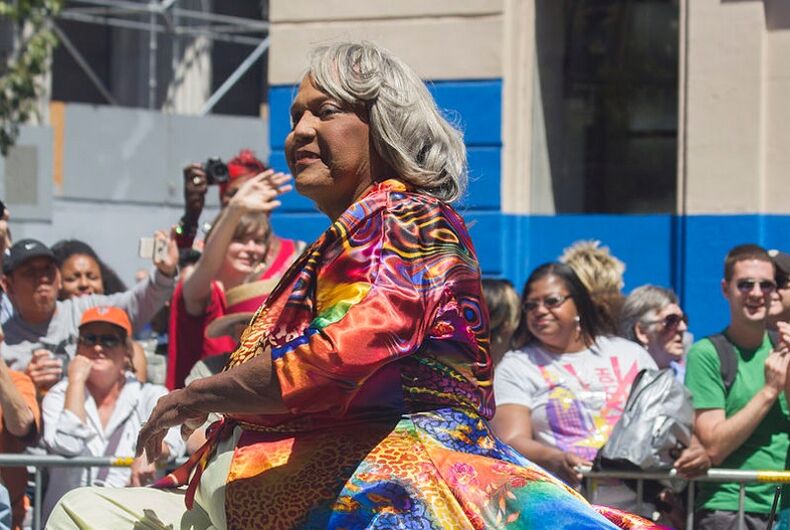 ”That was three nights of terror, ” is how Miss Major Griffin-Gracy describes the Stonewall riots. She should know. After all, she was there.

”I’m nothing special,” she also says describing herself, ”I’m just one of the girls.” But Miss Major is anything but ordinary.

Not only was Miss Major there at the beginning of the movement, but she’s worn many hats since then: organizer, activist, sex worker, prison abolitionist, transgender elder, and a voice for the most marginalized members of the community.

She’s been fighting for the rights of trans women of color — who have survived police brutality and internment in men’s jails and prisons — for more than 40 years.

Miss Major is the former long-time executive director of the San Francisco-based Transgender Gender-Variant Intersex Justice Project (TGIJP), which advocates for trans women of color in and outside of prison.

She’s also a survivor of Attica State Prison and the subject of the documentary feature MAJOR!, by Annalise Ophelian.

Born in Chicago in 1940, Miss Major discovered the city’s legendary drag balls as a teenager. Under the tutelage of the drag community, she began learning how to express her true self.

Miss Major moved to New York when her family kicked her out and began performing at the Jewel Box Revue. She was meeting a friend at the Stonewall Inn in 1969 when the bar was raided. She joined in the riots and was knocked unconscious by a police officer. She awoke in jail the next morning.

She would return to prison in the 1970s, where she was placed in the men’s population and met the leaders of the Attica prison riots, which would later influence her work with the prison system.

In the late 1970s, Miss Major moved to California and eventually settled in San Francisco just as the HIV/AIDS epidemic hit. She began working closely with the HIV/AIDS community, hiring other trans women to help care for those affected by the disease and starting the Tenderloin Aids Resource Center.

In 2003, she joined the Transgender Gender-Variant Intersex Justice Project and eventually became its executive director.

Despite nearly half a century of activist work, and the increased visibility of transgender celebrities, Miss Major is uncertain the past decades have brought the kind of change she seeks.

“There were girls who had to fight and die or be chased and harmed to get to this point we’re at today,” she said. “But this is not where it needs to be, or feel comfortable at, or stay.”

Not one to rest on her laurels, Miss Major plans on being a source of support and strength for “her girls” for decades to come. “My community still needs help.”

“They still need to know there are people out there that cares about them. That they don’t have to do anything special—you know you don’t have to have a feather flowing out your head just be who you are stand, your own ground, and have someone appreciate you for that. And that’s me.”