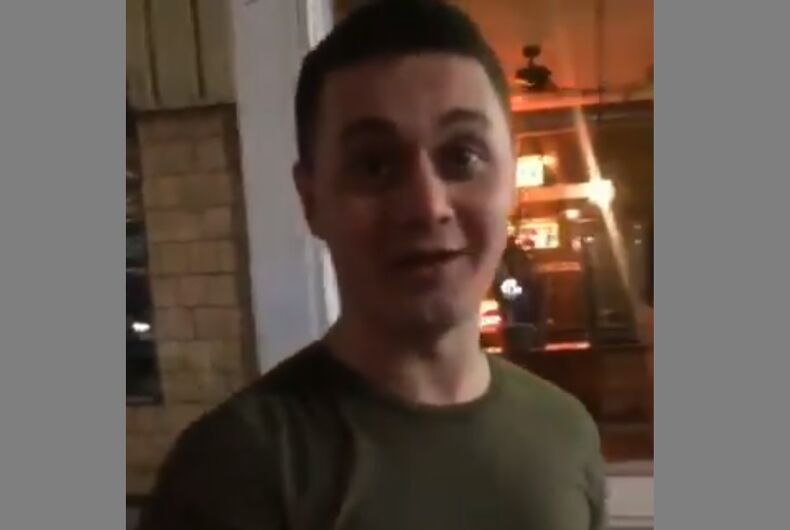 A gay man in Utah wants to help police find the person who attacked him for being gay, and he has video.

Sal Trejo in Salt Lake City said that he was out with friends on Saturday night when they were approached by the alleged assailant.

He was making “homophobic and misogynistic comments,” according to Trejo.

The victim started recording, and the man said, “Are you gay though?”

Trejo can be heard responding that he is.

“Oh, then you’re gay?” the man said, before punching Trejo in the arm and knocking him over.

My friends and I were assaulted by this homophobic man in downtown Salt Lake City last night. Anyone know him? The police are interested in having a chat with him. #SaltLakeCity @slcpd @slcmayor @EqualityUtah pic.twitter.com/1tPFSCADOp

Trejo said that the alleged assailant continued to call him a “faggot” and pulled out a knife.

When the group called the police, he went to his car and drove away.

“No one should be attacked simply because of who they are,” Equality Utah tweeted.

“We will work with Sal and law enforcement to ensure that justice prevails.”

We are deeply alarmed by the video posted by @saltrejo and send him our love. No one should be attacked simply because of who they are. We will work with Sal and law enforcement to ensure that justice prevails. https://t.co/543tGBa4Ph #utpol

Police are looking for the suspect and are investigating the attack as a hate crime.