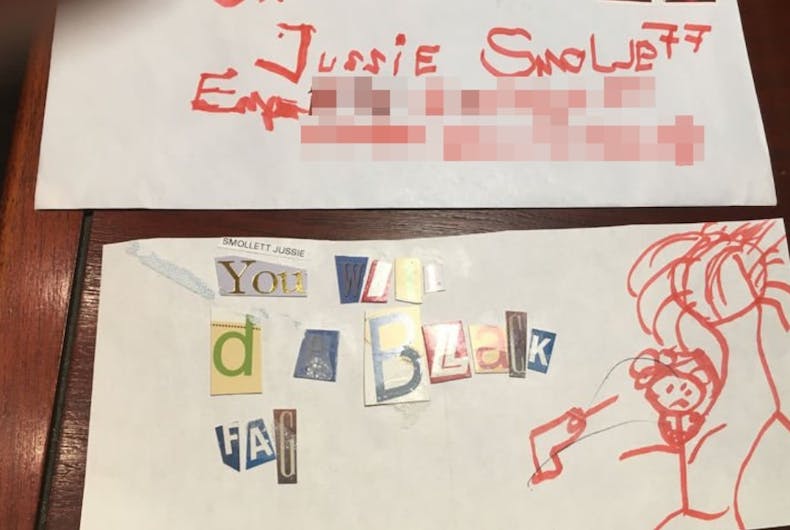 The FBI and the U.S. Postal Inspection Service (USPIS) are investigating if Jussie Smollett sent hate mail to himself. The actor has reportedly fired his attorney and hired Michael Cohen’s defense lawyer, Michael Monico, as his new legal representation.

Smollett, who plays a gay character on the Fox show Empire, was attacked in an alleged hate crime on January 29 by two men who he said used anti-gay and racist epithets.

The show is reportedly doing “serious rewrites” to cut back on Smollett’s scenes from episodes filming this week.

On January 22, the Fox studio in Chicago where Empire is recorded received a letter threatening Smollett. The letter called him a “black fag” and included a drawing of a person being hanged and shot.

The envelope also contained a white powder that was later determined to be crushed aspirin.

You will die black fag"

That letter brought the FBI into what would have otherwise been a local police investigation, since the letter was sent by the U.S. Postal Service.

Two unnamed federal officials told ABC News that the FBI and USPIS are investigating whether Smollett had a role in sending that letter.

The letter is currently being examined by an FBI crime lab.

The news comes after Chicago police talked with two persons of interest, Olabinjo and Abimbola Osundairo, brothers who had both worked with Smollett in the past, and released them this past Friday.

Police have not been able to verify their accusations.

The brothers said that Smollett paid them to stage the January 29 attack because the letter did not get enough attention, an accusation that Smollett has denied through his lawyers.

“As a victim of a hate crime who has cooperated with the police investigation, Jussie Smollett is angered and devastated by recent reports that the perpetrators are individuals he is familiar with,” the lawyers said in a statement over the weekend.

“He has now been further victimized by claims attributed to these alleged perpetrators that Jussie played a role in his own attack. Nothing is further from the truth and anyone claiming otherwise is lying.”

Yesterday, TMZ reported that Smollett’s role on Empire is being reduced, according to an unnamed production source.

The source said that the role reduction is a result of growing public sentiment that he staged the attack.

Smollett was supposed to have nine scenes and a musical number in the second to last episode of the season, but that has been reduced to four scenes and the musical number was cut, according to TMZ‘s source. He has a reduced role in the four remaining scenes.

TMZ had previously reported that Smollett was worried his character was going to be cut from the show before the attack, something that Twentieth Century Fox Television denied.

Martina Navratilova’s transphobic comments are starting to cost her