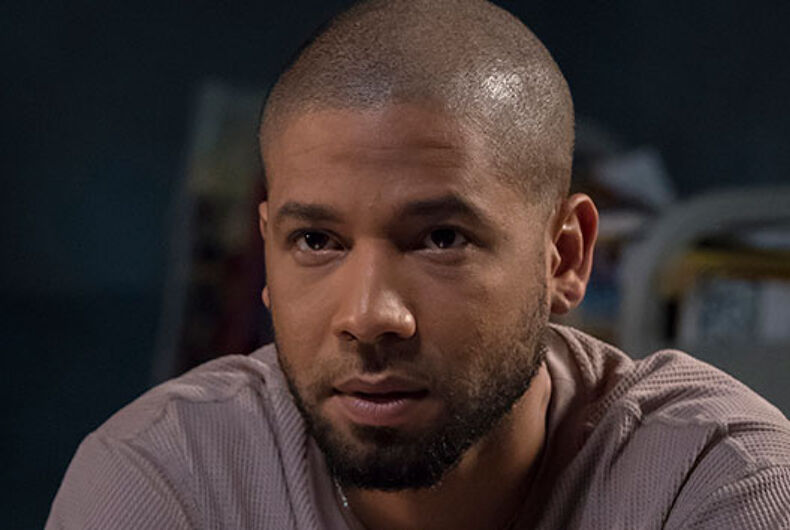 The Chicago Police Department and Twentieth Century Fox Television denounced media reports that Jussie Smollett faked an attack on himself because he was afraid of getting written off his hit television show.

On January 29, Smollett was allegedly beaten by two men and a noose was put around his neck when he returned to Chicago to start work again on the Fox series Empire. He said that the attackers used racist and homophobic slurs.

Yesterday, Chicago’s ABC affiliate and TMZ reported that “multiple” unnamed sources in the Chicago PD told them that they are investigating whether Smollett and two men staged a racist and homophobic attack in order to keep Smollett’s job.

ABC reported that the home of two persons of interest was raided on Wednesday night. Both men are Nigerian nationals who worked as extras on Empire.

The two men were reportedly “picked up” in connection with the attack at O’Hare International Airport after returning from a trip to Nigeria. The men left Chicago the night Smollett was attacked.

Citing their unnamed sources, TMZ reported that they were the two men caught by a nearby surveillance camera on the night of the attack.

ABC reported that their unnamed sources told them that Smollett was being written off Empire, and that he staged the attack to boost his national profile.

But a spokesperson for the Chicago PD said that there is “no evidence” to support the reports and that the unnamed sources were “uninformed and inaccurate.”

“Media reports anout [sic] the Empire incident being a hoax are unconfirmed by case detectives,” he tweeted.

Media reports anout the Empire incident being a hoax are unconfirmed by case detectives. Supt Eddie Johnson has contacted @ABC7Chicago to state on the record that we have no evidence to support their reporting and their supposed CPD sources are uninformed and inaccurate. pic.twitter.com/iSO5YFv452

Chicago Police Superintendent Eddie Johnson said in a statement that Smollett is considered the victim in the attack.

Chicago PD has also said that no one has been arrested in the attack so far, and that the investigation is still open.

In a statement, Twentieth Century Fox Television said that it’s “patently ridiculous” that Smollett was being written out of Empire.

“The idea that Jussie Smollet has been, or would be, written off of Empire is patently ridiculous,” the statement said. “He remains a core player on this very successful series and we continue to stand behind him.”

Smollett himself spoke out in an interview on Good Morning America earlier this week about previous rumors that he faked the attack. Those rumors cited his refusal to give his phone to investigators.

“They wanted me to give my phone to the tech for three to four hours. I’m sorry, but — I’m not gonna do that,” he said.

Instead, he turned over redacted phone records, which the Chicago PD said could not be used in the investigation.

“I have to acknowledge the lies and the hate,” Smollett said on Good Morning America.

“And it feels like if I had said it was a Muslim or a Mexican or someone black, I feel like the doubters would have supported me much more. A lot more.”

“And that says a lot about the place that we are in our country right now.”