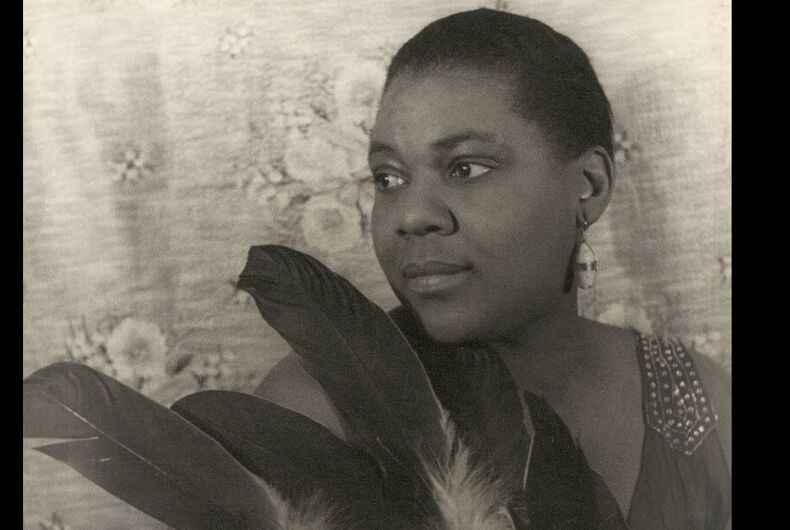 Contrary to the title of her hit, “Ain’t Nobody’s Business If I Do,” Bessie Smith lived and loved as she liked and didn’t care who knew it.

Born in 1894, in Chattanooga, Tennessee, Bessie Smith lost both her parents as a young girl. While her older sister shouldered the burden of supporting the family, Bessie and her younger brother, Andrew, earned money by busking on the streets of Chattanooga, in the heart of the city’s African American community.

Bessie’s older brother, Clarence, left home in 1904, to join a small traveling troupe. Upon his return in 1912, Clarence arranged an audition for Bessie with the troupe’s managers. They hired her as a dancer rather than a singer, as the troupe already had a well-known singer in Ma Rainey.

Before long, Bessie worked her way up to performing various chorus lines and established her home base at the ”81” theater in Atlanta. She also played in shows on the black-owned TOBA (Theater Owners Booking Association) circuit.

On one recording from her career, Smith sings, “There’s one thing I don’t understand. It’s a mannish acting woman, and a skipping, twisting, woman acting man.” Bessie, though, understood much more than her lyrics suggested.

When she wasn’t working on chorus lines, Bessie began her career-long practice of working her way through chorus girls. She made little secret of her bisexuality and had affairs with both men and women. She met security guard Jack Gee while living in Philadelphia, and married him in 1923.

Her marriage to Gee did nothing to stop Bessie from continuing to have affairs with women, including an intense relationship with a woman named Lillian Simpson. Following one argument, Bessie was heard to shout at Simpson, ”I got twelve women in this show, and I can have one every night if I want it!”

Gee caught her in the act at least once, with a chorus girl named Marie.

Bessie began her recording career in the 1920s, signing with Columbia Records in 1923. Though her style was considered too “rough” for some, she became the highest paid African American entertainer of her day, headlining a troupe of 40 and traveling the country in her custom made railroad car.

Both sides of Bessie’s first record, ”Downhearted Blues” backed with ”Gulf Coast Blues, ” were written by lesbian singer-songwriter Alberta Hunter. Based on the strength of her sales, Columbia nicknamed her the Queen of the Blues, and eventually promoted her to Empress of the Blues.

Within ten months of signing Bessie, Columbia sold more than 2 million records. Her sales reached six million over the next four years. Bessie made 160 recordings for Columbia, some of them with musicians such as Louis Armstrong, Fletcher Henderson, and Coleman Hawkins.

Bessie’s marriage to Gee ended when she learned he was using her money to fund a show for his mistress, Gertrude Saunders. The couple’s adopted son, Jack Jr., became caught in their split when Gee kidnapped him from Bessie’s home.

The Great Depression cut Bessie’s recording career short, and nearly put the industry out of business. In 1929, she made her Broadway debut in the flop Pansy, in which critics named her the show’s only asset. The same year, she appeared in the talkie motion picture St. Louis Blues, based on the song by blues composer W.C. Handy.

The Swing Era of the 1930s found Bessie in relative obscurity, working as a hostess and performing suggestive songs at a speakeasy in Philadelphia. Producer John Hammond found her there and asked her to record four sides for Okeh, which had been acquired by Columbia. Bessie was paid just $37.50 for each of what would turn out to be her last recordings.

On September 26, 1937, Bessie was critically injured in an automobile accident while traveling to Clarksdale, Mississippi, along Route 61. Her lover and driver, Richard Morgan escaped without injuries. Bessie died without regaining consciousness in the hospital the next morning.

Former NFL player Michael Sam regrets coming out when he did