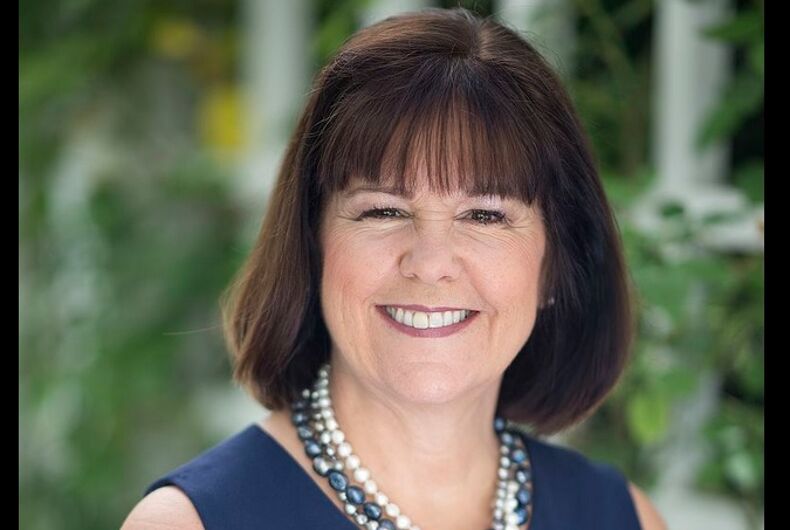 Donald Trump praised Karen Pence for getting a job at a school that bans LGBTQ people.

Last month, Pence announced that she would teach art at the Immanuel Christian School in Virginia. The school requires faculty to sign a statement that includes a passage about “moral purity,” which it defines as avoiding “homosexual or lesbian sexual activity” and “transgender identity.”

The school also requires parents to sign a document that says they will refrain from “participating in, supporting, or condoning sexual immorality, homosexual activity or bi-sexual activity.”

At the National Prayer Breakfast in Washington, D.C., Trump thanked Pence for working at the school.

“Our incredible second lady Karen Pence and by the way, by the way, I’ve gotten to know Karen so well,” he said. “She is a Marine Corps mom, a tremendous woman, a proud supporter of military families and she just recently went back to teaching art classes at a Christian school. Thank you. Thank you, Karen.”

“It’s disturbing that @SecondLady and @realDonaldTrump would put their stamp of approval on an institution that actively targets LGBTQ students,” GLAAD tweeted.

It’s disturbing that @SecondLady and @realDonaldTrump would put their stamp of approval on an institution that actively targets LGBTQ students. https://t.co/yg94d2m50B

In another part of the speech, he accidentally said that the “abolition of civil rights” is one of America’s greatest achievements.

“Since the founding of our nation, many of our greatest strides, from gaining our independence to abolition of civil rights, to extending the vote for women, have been led by people of faith and started in prayer,” he said.

The National Prayer Breakfast is hosted by members of Congress and organized by The Fellowship Foundation, a Christian organization.

It has taken place every year since 1053 and every president has attended since Dwight D. Eisenhower.

The guest speaker at the National Prayer Breakfast this year was Representative Steve Scalise (R-LA), one of the most anti-LGBTQ members of Congress.