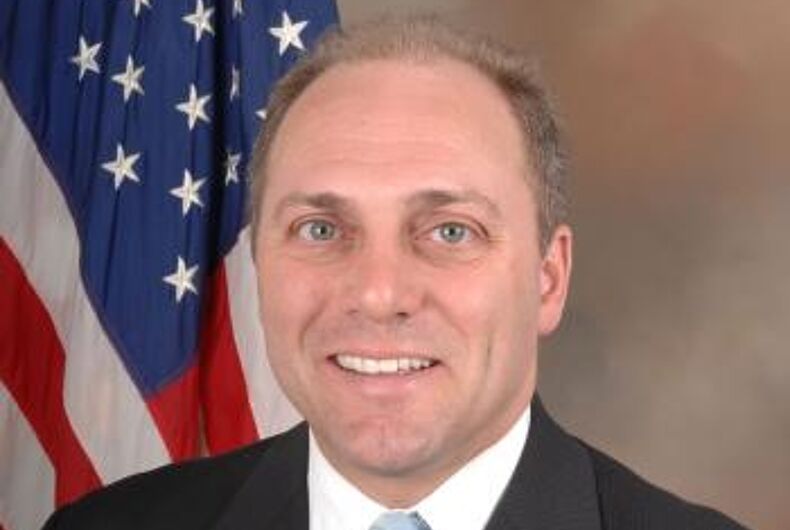 Someone seems to be throwing banana peels in front of House Speaker Paul Ryan in an effort to have him slip away. First came the news earlier this week that Ryan was considering resigning. Now comes the news that there’s a front-runner to succeed him: Rep. Steve Scalise (R-LA).

In a classic Washington move, Scalise’s supporters are fueling speculation that Ryan’s resignation is a done deal and Scalise is the heir apparent.

“The rumor mill is that Paul Ryan is getting ready to resign in the next 30 to 60 days and that Steve Scalise will be the new Speaker,” Rep. Mark Amodei (R.-NV) told a Reno newspaper, coyly putting the “rumor” front and center in the press without taking responsibility for spreading it.

Scalise himself is hardly doing his best to dampen the speculation. “I wouldn’t rule it out,” Scalise told Politico. “Obviously, I’ve shown interest in the past at moving up. ”

Scalise is experiencing a remarkable comeback. Just last summer, he was seriously wounded when a gunman targeted a softball game among Congressional Republicans. At the time, a lesbian police officer, Crystal Griner, was credited with saving Scalise’s life.

Here’s pretty much all you need to know about Scalise: one of his first public statements after the mass shooting declared that he was more opposed to gun reform legislation after being shot and still doesn’t support nondiscrimination laws for LGBT people – like his literal savior.

Just months after the shooting, Scalise spoke at an event hosted by the anti-gay hate group Family Research Council (FRC). FRC head Tony Perkins praised Scalise as “my good friend.” As well he should.

If anything, Scalise would be worse than Ryan when it comes to LGBT issues. Ryan is reflexively antigay, but Scalise has built his reputation on it. Scalise sponsored a constitutional amendment to ban marriage equality. He opposed the repeal of Don’t Ask, Don’t Tell. His voting record has earned him a zero from the Human Rights Campaign.

Moreover, Scalise is quite tight with the Freedom Caucus, the group of hard-right conservative in Congress determined to bend the majority to its view. While not an outright member of the group, Scalise formerly chaired the Republican Study Committee, which has a lot of overlap. As chair, Scalise promised to pull the party leadership “as far to the right as possible.”

The rumors of Ryan’s departure may be just that, but they make it clear that there’s a contingent in the House that would like to replace him. Scalise is already practicing with the Speaker’s gavel offstage, ready to go at a moment’s notice. Apparently, he’s undeterred by the prospect of overseeing record losses in the midterm elections and corralling conservatives disinterested in governing. Maybe Ryan knows that the time to get out is now.

After all, it’s hard to run for President when you’ve lost a congressional election. And that’s the job he really wants.

Parkland shooter’s gay groupies are a sick twist on equality