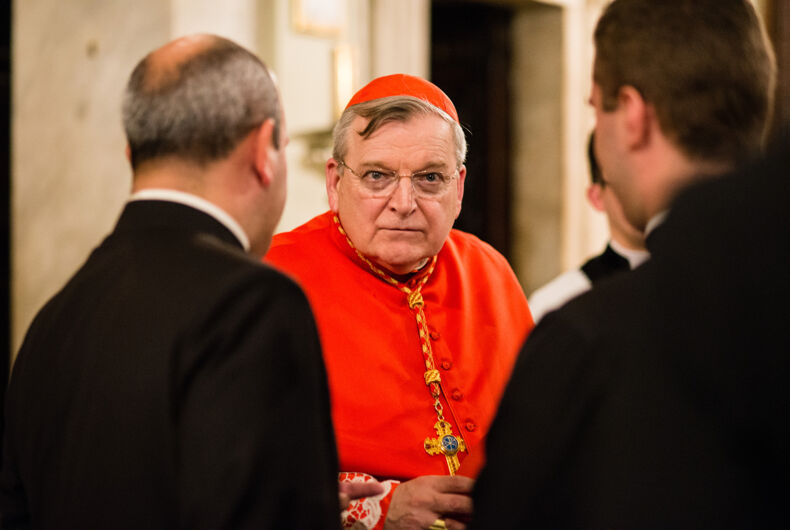 Catholic Cardinals Raymond Burke and Walter Brandmüller have issued a public letter on the eve of a major sex abuse summit at the Vatican. In it, the two church leaders blame “hedonistic” gay people for the rampant abuse of children while excusing the priests who are actually molesting kids.

The two conservative clerics complain that the church has strayed from “absolute moral law” by not condemning “the plague of the homosexual agenda” forcefully enough.

Burke and Brandmüller claim the rampant sexual abuse of children by Catholic priests and church leaders is “blamed on clericalism” but the “first and primary fault of the clergy does not rest in the abuse of power but in having gone away from the truth of the Gospel.”

“Before the drift in process, it seems that the difficulty is reduced to that of the abuse of minors, a horrible crime, especially when it is perpetrated by a priest, which is, however, only part of a much greater crisis,” the men write. “The plague of the homosexual agenda has been spread within the Church, promoted by organized networks and protected by a climate of complicity and a conspiracy of silence.”

“The roots of this phenomenon are clearly found in that atmosphere of materialism, of relativism and of hedonism, in which the existence of an absolute moral law, that is without exceptions, is openly called into question.”

“Sexual abuse is blamed on clericalism. But the first and primary fault of the clergy does not rest in the abuse of power but in having gone away from the truth of the Gospel,” they continued. “The even public denial, by words and by acts, of the divine and natural law, is at the root of the evil that corrupts certain circles in the Church.”

The abuse apologists end by demanding “a decisive act now,” calling it “urgent and necessary.” They do not specify what that act would be, but both have previously called on the Vatican to expel any gay clerics and regularly use LGBTQ people as scapegoats for problems within the church.