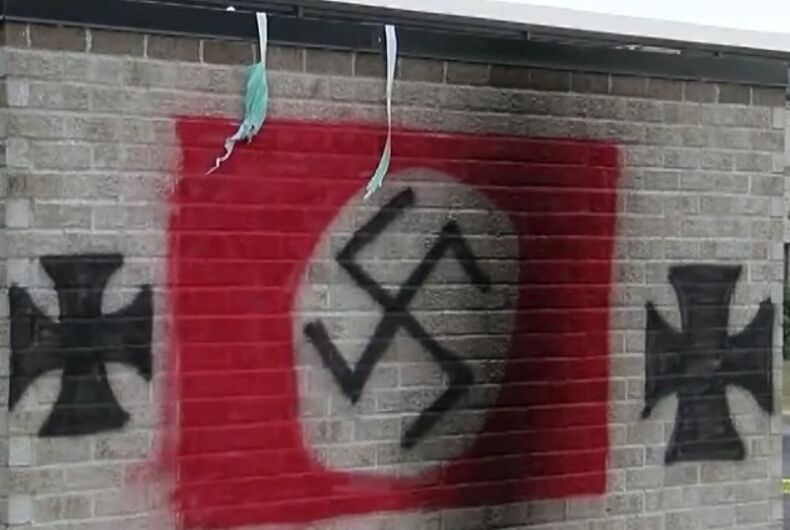 Someone painted Nazi symbols on a garbage bin shed at Congregation Shaarey Tefilla in Carmel, Indiana. It cannot be prosecuted as a hate crime because the state has no hate crime legislation.Photo: Screenshot/YouTube

The Indiana Senate voted to remove all categories from the state’s proposed hate crimes legislation despite numerous hate crimes in the state over the past few years.

Indiana is one of five states without any hate crimes legislation at all. Democrats have tried to pass a hate crimes bill for years, but are always stymied by Republicans supported by the religious right.

Senate Republicans offered an amendment to the bill yesterday that removed all the mentioned categories, like race, sexual orientation, and gender identity. The bait-and-switch maneuver was promoted by local anti-LGBTQ hate groups who said the original law privileged “politically favored victim categories.”

Instead, judges will be allowed to use “bias,” generally, as an aggravating circumstance when it comes to sentencing in criminal cases.

All Democrats and seven Republicans voted against the amendment, but it still passed.

Democrats walked out of the state senate and refused to vote on the remaining bills on the calendar.

“You don’t have agree with how somebody lives to respect their ability to live freely and responsibly in this state,” said state senator Greg Taylor (D).

“But when you take that ability away, knowing that they have been targeted, it is a shame and this is a disaster for the state of Indiana.”

Republicans defended the move, saying that the law will cover “everyone,” and, at the same time, prevent courts from interpreting the law to include categories that aren’t there.

“Do you include a list in which you can maybe leave somebody off, or the court could interpret somebody not included in that, or do you make it more general so that everybody can be included?”

“What this amendment does is basically saying, folks like me, I don’t exist,” he said during the senate debate. “I don’t think that’s fair.”

“The version of the bill approved today by the Senate does not get Indiana off the list of states without a bias crime law,” the statement said.

“We have a long way to go, a lot of work to do, and fortunately the time yet still to do it. I will continue to fight for the right ultimate outcome for our state and citizens this year so we’re not right back here in the same place next year.”

The entire bill will go to the senate floor for debate tomorrow, and Republicans believe they have enough support to pass it.

State house leadership has already said that they will support the non-specific hate crimes bill.