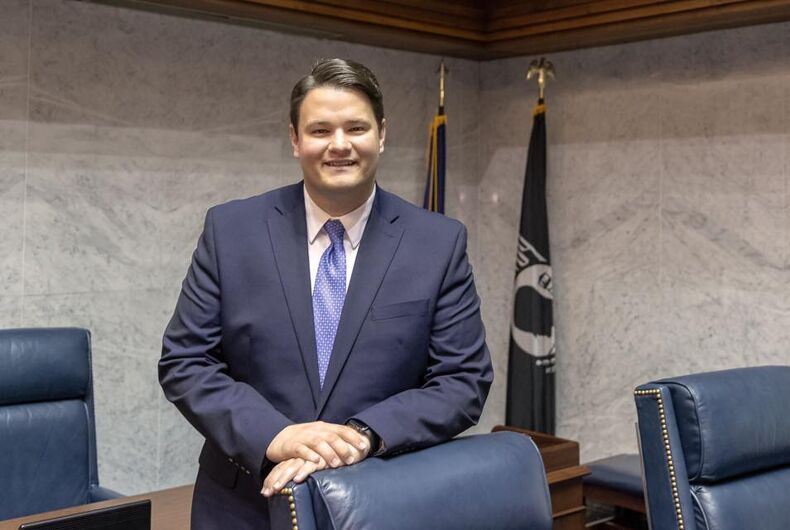 The first out gay legislator in Indiana took his oath of office today, two weeks after he soundly defeated one of the most anti-LGBTQ senators in the chamber.

Sen. J.D. Ford (D-Indianapolis) took the oath from Chief Justice Loretta Rush this afternoon.  The Senate gallery was filed with about 200 of Ford’s well-wishers, campaign volunteers and friends.

“It’s ironic that we’ve been here so many times, protesting or advocating for equality, and now I’m in a voting seat,” Ford said after the ceremony.  “We’re all coming off campaigns, coming out of our corners, and today I felt like… folks want to work together where we can.”

“I was overwhelmed with the good wishes I got from both sides of the aisle,” Ford added.  “I’m encouraged by the response my election got, and I’m eager to get to work.”

Ford had breakfast with Gov. Eric Holcomb (R) in the morning.  The governor “wished me well, and I appreciate that,” Ford said.  “He understands the need for bipartisan work on important issues.  Being a freshman, I get that the process is long, but I hope we can continue today’s bipartisanship.”

“So many folks say ‘we’re glad you’re here’ and that’s not just Democrats,” Ford continued. “It was a rough campaign for many of us but the state has some pretty serious issues to consider.  We’ve got work to do.”

Indiana is one of only five states without a comprehensive hate crime law.  Holcomb signaled a shift in Republican priorities, when he called for passage 45 days ago.  Ford hopes that brings other Republicans into the fold.

Ford defeated two term Sen. Mike Delph, who was a steadfast opponent of marriage equality and pro-LGBTQ initiatives.  Delph was a darling of the “religious liberty” crowd during Indiana’s famous fight over the “Religious Freedom Restoration Act,” championed by then-Gov. Mike Pence.

Ford ran against Delph in 2014, and lost by a small margin. He immersed himself in district issues and ran an aggressive grassroots campaign that also raised almost $400,000, a significant amount for a legislative challenger.

Walking onto the Senate floor, he was greeted with loud applause.

Ford joins a small Democratic caucus in the Senate, which is 40-10 Republican.  He hopes to cut across partisan divides on issues he outlined in his campaign” education chief among them.

“There are so many areas where we can agree,” he said.  “And we can make progress.”

Someone sprayed acid in the eyes of two Russian LGBTQ activists