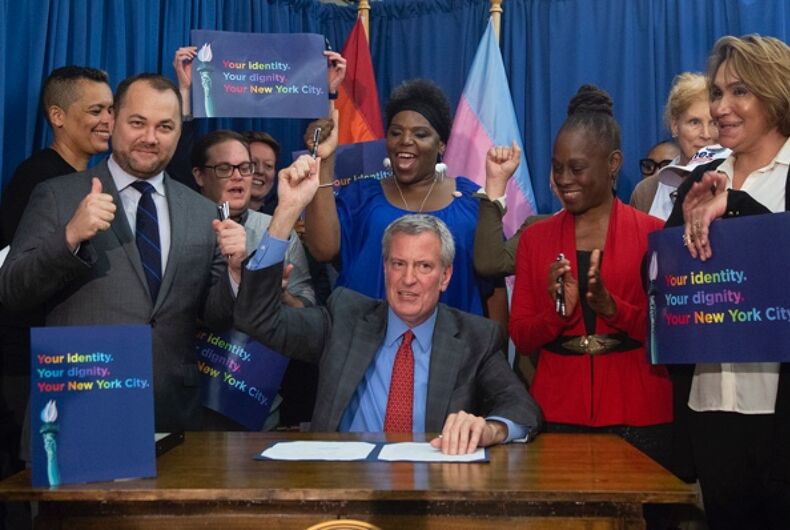 People in New York City now have another option for the gender on their birth certificate.

A measure passed by the city council last September went into effect today. It allows birth certificates to be updated with three options: M, F, or X.

Effective today! People born in NYC can now change the gender marker on their birth certificates to “X.” The third category makes birth certificates more inclusive to all gender identities. Here's what you need to know: https://t.co/QyaSSVK7sE pic.twitter.com/38BcxCppzs

Additionally, transgender New Yorkers no longer need a letter from a doctor to correct the gender on their birth certificates. Instead, it’s enough to bring in a notarized affidavit that explains that the gender marker needs to be updated to affirm one’s gender identity.

“Transgender and gender non-conforming New Yorkers deserve the right to choose how they identify and to live with respect and dignity,” said Mayor Bill de Blasio in a statement.

“I have long advocated for this gender ‘X’ category option and I am proud that New York’s birth certificates are now as inclusive as our City,” said City Council Speaker Corey Johnson.

“I hope everyone who chooses to change their gender marker knows that their City government has their back and supports their decision.”

Andy Cohen fires back at New Years critics, but was he almost dropped from the show?