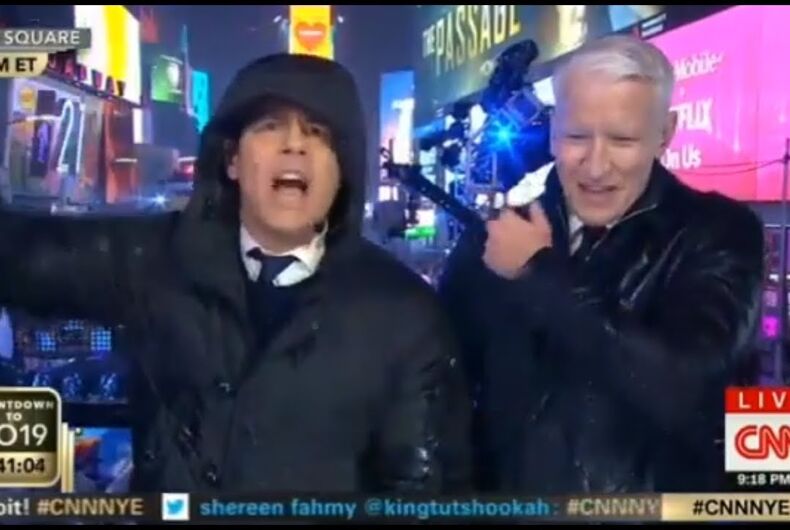 Andy Cohen is no Kathy Griffin. While the comedian took over Griffin’s gig hosting CNN’s annual New Years Eve special with Anderson Cooper, he’s just not in the same league.

Griffin was dropped after a photo of her holding Donald Trump’s severed head went viral, causing national controversy. The photo, released by a photographer without her permission, nearly tanked her career.

Now Cohen is firing back at critics of his lackluster on-air performance, but was he almost booted from the show before it even began?

During the show, viewers took to social media to complain about Cohen’s stilted jokes as he and Cooper got drunk on air and exchanged banalities. Cooper, who isn’t a big drinker, repeatedly complained about the burn of the alcohol as Cohen encouraged him and viewers to tip their own glasses.

When rightwing actor James Woods sneered at Cooper’s reactions to the burn of alcohol, implying he wasn’t manly enough to swill booze, Cohen shot back, calling Woods an “asshole.”

But most critics focused on the pair of gay hosts as an unfunny teaming that simply doesn’t measure up. Cohen’s one-liner responses, meant to be burns, only put a finer point on the criticism.

We feel the same about you.

As long as we embarrass you. That’s our goal. Just you.

I only need Abreva after you’ve been kissing me all night dude. Speaking of, we are overdue

But Griffin was the one to drop the bomb that Cohen was almost replaced as Cooper’s co-host. She told her Twitter followers that comedian Leslie Jones was in talks to replace Cohen.

Griffin has previously torn into Cohen for dissing her and tearfully admitted that the controversy destroyed her friendship with Cooper when he piled on the publicly condemnation of her.

She says that while she was getting death threats, Cooper didn’t even bother to reach out to her to get her side of the story or check on how she was handling the onslaught.

Related: Watch Kathy Griffin excoriate Anderson Cooper by reading a letter to him on stage

“I was elated when I heard this news,” she tweeted. “If I can’t get the gig, I will cheer for Leslie. I don’t know her, but I thought it was such a great idea for CNN to have a woman of color over 50 who is so sharp, improvisational, and hilarious. I was ready to congratulate her publicly.”

Griffin alleges that Jones was dropped from the show because NBC Universal didn’t want the Saturday Night Live star appearing on a different network. But, as Griffin points out, Cohen also works for NBC.

The comedian closed out her rant by talking about the huge pay discrepancies between her salary and Cooper’s while she had the gig. Cohen’s pay for the night’s work wasn’t revealed.

B) I’ve been in this business for over 30 years…I’ve gotten to know everybody. A few little birdies told me some juicy nuggets…

D) I was elated when I heard this news. If I can’t get the gig, I will cheer for Leslie. I don’t know her, but I thought it was such a great idea for CNN to have a woman of color over 50 who is so sharp, improvisational, and hilarious. I was ready to congratulate her publicly.

F) As I started asking around to find out when CNN was going to announce Leslie as co-host, I heard that they had downgraded her to a couple of segments or some sort of a guest role.

H) Soon after, I heard from a couple folks she had been dropped from the show entirely because NBC Universal did not want her to appear on a different network. This didn’t pass the smell test with me. The #JeffZucker I knew for years could make this happen. What say you, Jeff?

J) You have to admit, it didn’t make sense that NBC Uni wouldn’t have a problem with Andy Cohen, who also works for NBC Uni, appearing on CNN, but would have a problem with Leslie? Since Leslie didn't work out, CNN couldn't find one woman standup comic star to co-host? Jeff?

L) I worked my way up by the 10th year at CNN to get a fee of $150,000. By the way, just as a point of reference, Anderson Cooper regularly bragged for years that his annual CNN contract was $10 million a year.

N) The first two years I appeared on CNN, it didn’t even occur to me to ask for a salary. The 8th year when I asked Jeff Zucker for a raise, he was so angry he docked me 30%. I’m sorry to say I took the pay cut because I truly enjoyed making you all laugh.

O) I really hope @Lesdoggg has been paid fairly for New Years…but I'm not optimistic. The boys get paid much, much more in the comedy industry and that is a fact I know a lot about.