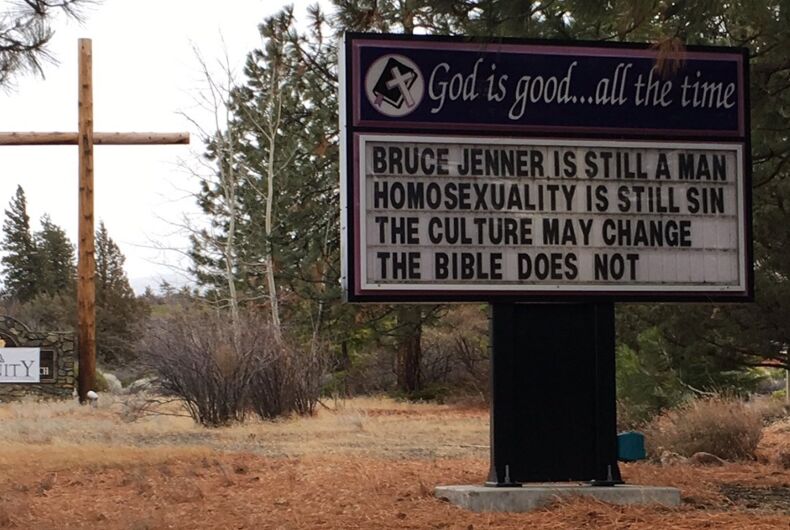 An anti-LGBT sign was posted in front of Trinity Bible Presbyterian Church and neighbors are upset by it.Photo: Twitter/Jennevieve Fong

Trinity Bible Presbyterian Church is Lake Shastina, California, has stirred controversy in the town after posting an anti-LGBTQ sign in front of the building.

The church, part of a conservative splinter group of the more moderate Presbyterian Church, has posted the sign previously, but this year locals have had enough.

The sign reads: “Bruce Jenner is still a man. Homosexuality is still a sin. The culture may change. The Bible does not.”

Concerned residents protested outside of the church before services over the weekend at the “Shastina Love Rally.” The rally’s Facebook page said it was meant to “spread love and show the world how Siskiyou [County] embraces everyone!”

Pastor Justin Hoke told the Siskiyou Daily that he felt the sign is necessary because it “rebukes sin.”

“It is not possible to preach the gospel in short pithy statements. I have used this sign for seven years now to provoke reflection or make a strong point about a single truth,” Hoke wrote on Facebook. “Such as this one: ‘The culture does not determine truth, God does.’ … The funny thing is, I could have put those words up and no one would have cared. Why? Because it does not rebuke sin or call anyone to repentance. The church has lost its saltiness and I fully expect to get as much or more flack from the visible church as I am getting from the world.”

The rally, organized over social media, was “just a community effort to show that we actually care about all members of our community, regardless of orientation gender or other aspects of identity that make them unique,” protestor Robyn Vandiver told KTVL.

“I thought it was a poor use of religion. But after thinking about it, I’m just trying to come to a level of acceptance and forgiveness.”

Weed resident Robyn Vandiver is here to express her support of the LGBT community pic.twitter.com/5KSo75Zkny

Organizers say the rally is not only to protest the sign, but to show the “local and national queer community an outpouring of love greater than the ignorance of one misguided man with a light up sign.” pic.twitter.com/gwPJ4UcSl3