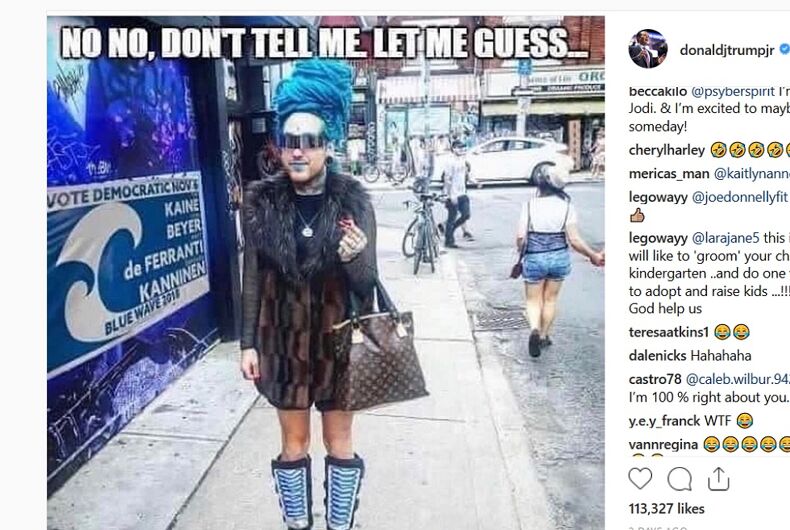 Donald Trump Jr. shared a transphobic meme on Instagram over the weekend.

In the meme, there’s an image of person with a blue wig, fake nails, a handbag, and sunglasses, and they appear to have a beard. It’s not clear who is in the image or if it has been edited. In the background, there’s a sign telling people to vote Democratic.

Over the image is written, “NO NO, DON’T TELL ME. LET ME GUESS… TRUMP IS NOT YOUR PRESIDENT?”

Related: Trump Jr bragged that his penis is bigger than his dad’s

The image doesn’t say what the person’s sex assigned at birth is or what the context for their outfit is (drag performer? trans or nonbinary person? cis girl going to a party? gay boy on Halloween?), but the joke appears to be that the person is gender nonconforming, so they would never vote for Donald Trump.

Which… isn’t a clever or humorous observation. It’s more just a result of how much Republicans and Donald Trump père hate LGBTQ people.

But if you hate LGBTQ people and just find it funny to look at them, then that’s the joke. And plenty of the young Trump’s followers got the joke.

“this is the freak who will like to ‘groom’ your children in kindergarten ..and do one who is allowed to adopt and raise kids …!!!!” said another.