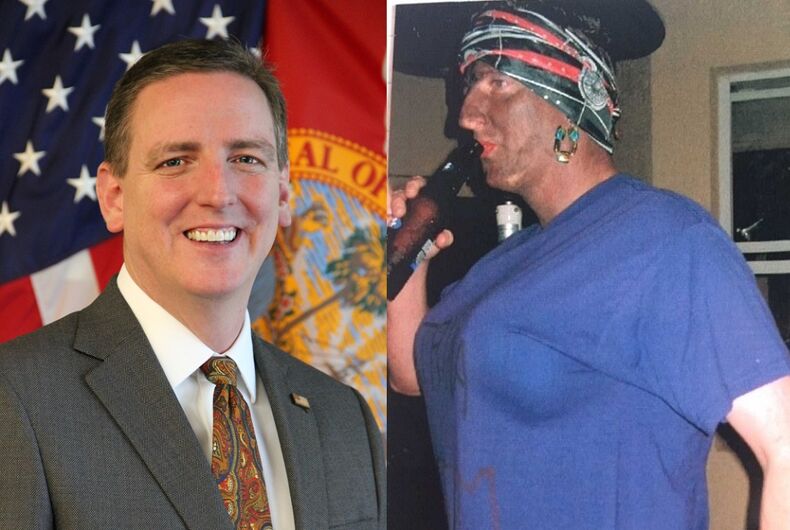 The Florida secretary of state has resigned after images of him in blackface drag emerged.

Michael Ertel, 49, had been in office for a few weeks before pictures of him dressed as a “Katrina victim” at a 2005 Halloween party were leaked to the Tallahassee Democrat this past Thursday morning.

In the pictures, Ertel is wearing black makeup and red lipstick, as well as fake breasts, earrings, and a New Orleans Saints bandana around his head.

His T-shirt had “Katrina Victim” written on it, a reference to Hurricane Katrina, which struck the New Orleans area in 2005 and killed nearly 2000 people. Many of the victims were black and were subject to racist attacks in the media.

Although he was dressed as a woman, Ertel does not publicly identify as LGBTQ and is married to his wife Michelle.

Related: ‘Gay families = burn in hell’ and other post-election messages of hate and racism

Ertel confirmed that he was in that photo and said, “There’s nothing I can say.”

“It has been an honor to serve you and the voters of Florida,” he wrote in his resignation email.

“I don’t want to get mired into kind of side controversies, and so I felt it was best to just accept the resignation and move on,” he added.

Ertel would have been 35-years-old when the photos were taken. At the time, Ertel was the Seminole County supervisor of elections, a position that Governor Jeb Bush (R) appointed him to when the previous supervisor stepped down. He ran as a Republican in the 2006 and won.

He was recognized for his work increasing voter registration and he spoke out against Governor Rick Scott’s (R) purge of voter rolls.

In December, DeSantis named Ertel the future secretary of state, a position that oversees elections. The state restored voting rights to over a million ex-felons in a constitutional amendment that went into effect this month, and Ertel would have been in charge of implementing it.