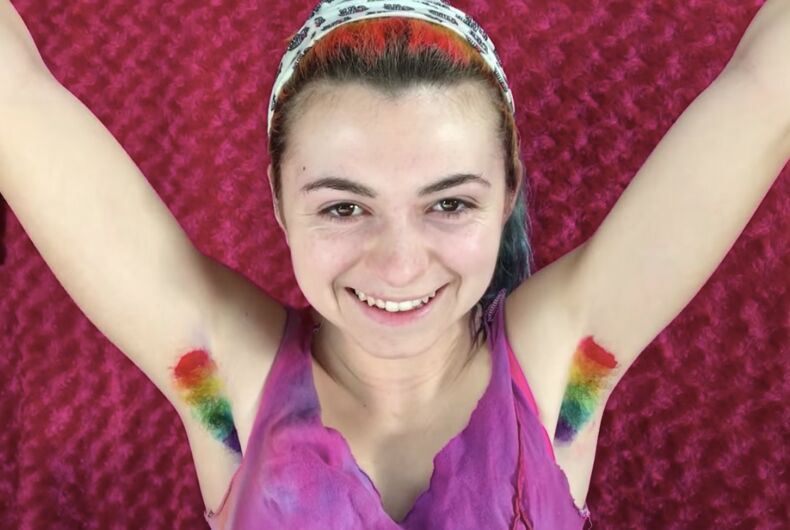 While YouTube recently created a policy to discourage people from engaging in dangerous pranks and challenges, some women on social media have started engaging in the safe and colorful practice of dyeing their armpit hair into rainbow colors…. and for a good cause.

According to the viral trend site Lad Bible, the rainbow armpit hair craze (or “unicorn hair” as it’s called) has popped up recently as part of a female body-positivity movement known as “Januhairy” where women are encouraged to grow out their body hair as a sign of beauty, autonomy and empowerment.

Similar to “Movember,” Januhairy is also intended to raise awareness and funds for women’s health charities.

Two big social media influencers have helped popularize the unicorn armpit hair trend of late. St. Louis hairstylist Caitlyn Ford posted an image of one of her clients, arms up and rainbow-colored tufts of hair peeking out.

The YouTube crafting vlogger Rainbow Girl also posted a video of her dyeing her own armpit hair with some hair bleach and coloring. She has 279,560 subscribers on YouTube.

While bleach can irritate the skin, it’s safe if washed off according to the product’s directions. Any hair dried out by the bleaching process can also be replenished by moisturizer.

Gender-neutral, sexually fluid pop star Miley Cyrus also recently dyed her armpit hair, but she skipped the rainbow-colored “unicorn hair” and just went for a full-on red instead. In the image of her dyed armpit hair, she wore a sleeveless undershirt and flexed both biceps in a show of power and confidence.

Though women have been removing armpit hair as far back as ancient Egypt, they weren’t pressured to do so during the 1700s and 1800s. It wasn’t until the early 1900s that the Gillette razor company began encouraging women to remove “objectionable” armpit hair (using their products, of course).

Since then, it has remained a sexist beauty standard.

Florida’s secretary of state was caught in blackface drag. He just resigned.